BY hellodrdavis on March 8, 2019 | Comments: one comment
Related : Soap Opera, Spoiler, Television, The Bold and the Beautiful 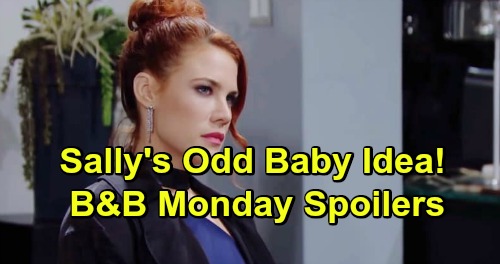 The Bold and the Beautiful spoilers for Monday, March 11, tease that Zoe Buckingham (Kiara Barnes) will be on the warpath. She saw a social media post of Wyatt Spencer’s (Darin Brooks) showing Florence “Flo” Fulton (Katrina Bowden) at the dinner party mingling with Hope Spencer (Annika Noelle) and Liam Spencer (Scott Clifton). Zoe’s outraged that Flo is spending time around Hope and Liam, as she’s liable to spill the beans about Reese Buckingham’s (Wayne Brady) baby swap and adoption scam.

Of course, if Flo did go and tell Hope and Liam that their daughter is actually alive, then Flo, Reese, and Zoe would all be in some major legal trouble. Zoe will do just about anything to protect her dad from going to jail and losing his medical license, so she’ll track down Flo to find out exactly what she was doing at Wyatt’s house and whether she said anything incriminating to Hope and Liam.

But Flo will assure Zoe that she didn’t say anything about the baby switch, and she’ll explain that she’s Wyatt’s ex-girlfriend and that she just happened to run into Wyatt, who invited her to a dinner party. Flo didn’t know what Wyatt was related to Beth’s father, so she couldn’t have known that Hope and Liam would show up at the party.

Zoe will be horrified to learn about Flo’s connection to Wyatt and therefore to Hope ad Liam, and she’ll probably become more determined than ever that Flo needs to leave the Los Angeles scene and return to Las Vegas. She’ll probably argue that it’s just too dangerous for Flo to be around Hope and Liam right now, especially since Flo’s feeling so guilty.

Meanwhile, on the new episode of B&B on Monday March 11, Sally Spectra (Courtney Hope) and Wyatt will reflect on their very interesting dinner party. It’s just a little too unbelievable that Wyatt would run into his high school sweetheart, and that she would turn out to be Phoebe Forrester’s (Isabella de Armas and Redford Prindiville) birth mother. They’ll marvel at the coincidence.

Sally will also marvel about the close bond that Hope and Flo seemed to form at the dinner party. She’ll note that both Hope and Flo were pregnant at the same time, yet neither of them has their baby. Sally and Wyatt will discuss the fact that the two women must have given birth right around the same time, and it looks like this might send up a red flag or two for Wyatt. Will he investigate further?