The Bold and the Beautiful Spoilers: Consequences of Flo’s Actions Destroy Couples and Lives – New Logan Brings Misery and Tragedy

BY Sean O'Brien on May 5, 2019 | Comments: one comment
Related : Soap Opera, Spoiler, Television, The Bold and the Beautiful 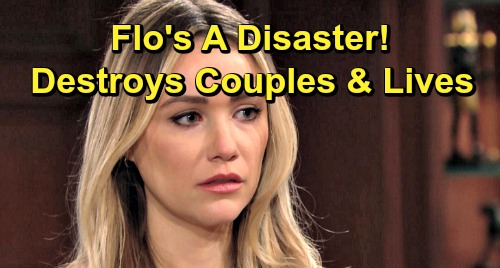 The Bold and the Beautiful spoilers tease that Flo Fulton-Logan (Katrina Bowden), a never-before-seen character until just recently, has quickly become a main focus in this fictional version of Los Angeles, California. Her choice to go along with Reese Buckingham’s (Wayne Brady) despicable baby swap plan is now producing a greater number of unexpected consequences than Flo could have ever imagined.

Hope Spencer (Annika Noelle) remains emotionally off-center, due to the perceived loss of her second unborn child. That’s fully understandable, considering the supposed tragic circumstances, that are simply sad instead.

She did legitimately miscarry her first child. But Hope’s second child, Beth Spencer (Isabella de Armas and Redford Prindiville), remains alive and is living under the name Phoebe Forrester.

But the notoriously addicted gambler doctor did and then sold her to Steffy, with Taylor Hayes (Hunter Tylo) having paid Flo two-hundred and fifty thousand large as part of the faux, private adoption.

The above is why Steffy not only has Kelly, but her assumed adopted child, Phoebe, who she named after her own deceased sister, in Paris with her. The detachment Liam felt for his biological child and the little girl who is actually is own, caused him to recently fly from L.A. to France as a result.

While Liam’s been away, Thomas Forrester (Matthew Atkinson) has been playing. That means he’s been using Hope’s grief and his own sister’s (Steffy) absence with the girls, to engineer Liam’s trip abroad and make a play for Hope.

Liam is about to return and confront Thomas in that regard after being informed by Wyatt about what’s been going on.

Thomas’ use of his son, Douglass Forrester (Henry Joseph Samiri) falls almost as low as Reese’s Catalina Island actions. However, Hope has thus far resisted Thomas’ open call for her to leave Liam and be with him.

In a vacuum, Thomas’ plan would make sense. Liam can return to his one-time wife, Steffy, and be a full-time dad to Kelly and Phoebe. Meanwhile, Hope would shift her love from Liam to Thomas, while also becoming Douglas’ mom.

Thomas’ myopic view of the world, being that it centers upon himself, is reprehensible. While Flo has willed herself forward and is withholding a truth that must come out, at least her conscience is conflicted.

Meanwhile, as the soapy swirl dramatically increases, Wyatt Spencer (Darin Brooks) and Sally Spectra (Courtney Hope) are having relationship troubles. They too are tied into Flo and Thomas’ misdeeds, though Wally doesn’t understand the full extent of their problems yet.

Lope might fracture, while Steam rebuilds? Wally appears to be ending, while Wyatt and Flo revisit a relationship that began in high school? Two questions, among others, that will be answered as B&B’s compelling storyline plays out. CDL is a leading source for everything linked to The Bold and the Beautiful. Check back regularly for B&B spoilers and news!