The Bold and the Beautiful Spoilers: Sally Attacks Thomas for Destroying Her Relationship – Quinn Celebrates the End of ‘Wally’

BY Heather Hughes on May 4, 2019 | Comments: one comment
Related : Soap Opera, Spoiler, Television, The Bold and the Beautiful 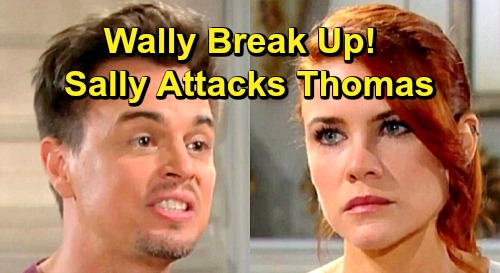 The Bold and the Beautiful (B&B) spoilers tease that Sally Spectra (Courtney Hope) will move out of Wyatt Spencer’s (Darin Brooks) place. Their upcoming fight will be an epic one, so it won’t be easy to move past. After Sally comes clean about the secret she was keeping for Thomas Forrester (Matthew Atkinson), it’ll break the trust she’s built with Wyatt and turn him against her.

Sally will pack up her things and apologize to Wyatt. She’ll be truly sorry for her part in all this, but she won’t let Thomas off the hook for setting it in motion. The Bold and the Beautiful spoilers say Sally will corner Thomas and rip into him for destroying her relationship. She’ll think she could’ve remained perfectly content with Wyatt if Thomas hadn’t been so caught up in his own agenda.

Thomas will hate that Sally’s romance blew up, but he might argue that Wyatt’s overreacting. It’s not like Sally was sabotaging Liam Spencer (Scott Clifton) and Hope Spencer (Annika Noelle) herself. Nevertheless, keeping Thomas’ secret will ruin everything for Sally, so she’ll explode at Thomas and try to figure out where she goes from here.

Of course, Quinn Forrester (Rena Sofer) won’t care where Sally goes as long as she stays away from Wyatt. B&B spoilers say Quinn will be ecstatic when she hears about “Wally’s” split. She’ll feel like Sally is gone from Wyatt’s life for good, so she’ll practically do a happy dance. Quinn will think this means Wyatt can have the future he’s meant to have with Florence “Flo” Fulton (Katrina Bowden).

The Bold and the Beautiful spoilers say Wyatt will indeed grow closer to Flo over the next few weeks. Part of her will enjoy getting to know Wyatt on a deeper level. Another part of Flo will feel guiltier than ever since she’s keeping the baby swap under wraps. Flo is far worse than Sally!

As Flo and Wyatt’s relationship begins to thrive again, it should lead to major complications. Will Sally ever get another chance with Wyatt? We’ll give you updates as other B&B news comes in. Stay tuned to the CBS soap and don’t forget to check CDL often for the latest Bold and the Beautiful spoilers, updates, and news.