The Bold and the Beautiful Spoilers: Friday, September 27 – Shauna’s There For Ridge Again – Brooke & Thomas Duke It Out – Vinny Returns 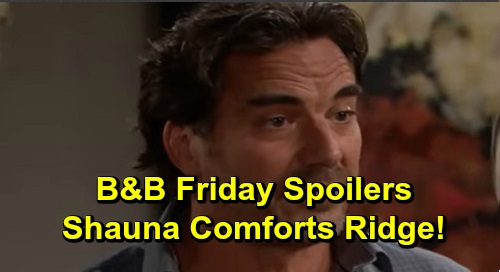 The Bold and the Beautiful spoilers for Friday, September 27, tease that Ridge Forrester (Thorsten Kaye) will face some familiar angst. As B&B viewers know, he just caught Thomas Forrester (Matthew Atkinson) sneaking a visit with Douglas Forrester (Henry Joseph Samiri), and he wasn’t happy about it. Thomas later asked Ridge whether he would support him, and Ridge didn’t immediately answer. It’s clear that Ridge feels torn between his son and his wife Brooke Forrester (Katherine Kelly Lang).

Of course, Brooke doesn’t want Thomas anywhere near the mansion or near Douglas, and Ridge knows that if she knew Thomas had snuck in, she’d be outraged. Ridge really doesn’t want to fight with Brooke, so it looks like he might struggle with the decision of whether to disclose Thomas’ visit to her. At any rate, it’s going to cause him some discomfort.

According to B&B spoilers, Ridge will later encounter someone who will be more than willing to help him with his troubles…Shauna Fulton (Denise Richards). Ridge will have a big decision on his hands, and he’ll need a sounding board. What that decision is remains to be seen, but it looks like Shauna will wind up being a confidante to Ridge and help him decide what to do.

In fact, Ridge might find himself pleasantly surprised by Shauna’s kindness. He just might enjoy having an interaction with a woman that doesn’t predictably launch into an argument over his son, and it seems that Shauna will be happy to be there for him. As B&B viewers know, Shauna is quite smitten with Ridge, and this experience will probably serve to intensify her attraction.

Meanwhile, on the new episode of B&B on Friday, September 27, Brooke will find herself in the middle of a serious argument with Thomas. As B&B viewers know, Brooke was headed to the hospital to see Katie Logan (Heather Tom), but it looks like she’ll soon be back to the mansion where she’ll find Thomas. That will cause her to explode with fury.

According to B&B spoilers, tempers will flare between the two, and soon a full-scale battle will ensue. Brooke has a lot of pent-up rage toward Thomas, and it looks like it will all come pouring out. Brooke won’t hold back, and it doesn’t look like Thomas will hold back, either. He’s irritated that Brooke doesn’t want to grant him access to his own son, and he’ll probably feel that she’s ungrateful for him keeping her out of jail for pushing him over the cliff.

Finally, look for Thomas’ friend Vinny Walker (Joe LoCicero) to reappear. He’ll show up at Bikini Bar and interact with Danny the bartender (Keith Carlos), and according to B&B spoilers, he’ll learn some information that might be of help to Thomas. Since he’ll be talking to Danny, and Danny knows that Ridge spent the night with Shauna, he’ll likely get his hands on that information. And ongoing B&B spoilers indicate that Thomas will find that information useful in trying to break up “Bridge.”

It sounds like a lot of B&B drama is heating up for Friday’s episode, so stay tuned! We’ll give you updates as B&B news comes in. Stick with the CBS soap and don’t forget to check CDL often for the latest Bold and the Beautiful spoilers, updates, and news