The Bold and the Beautiful Spoilers: Week of September 30 – Liam’s Promise to Terrified Hope – Bill’s Fierce Warning to Shauna

BY Heather Hughes on September 26, 2019 | Comments: one comment
Related : Soap Opera, Spoiler, Television, The Bold and the Beautiful 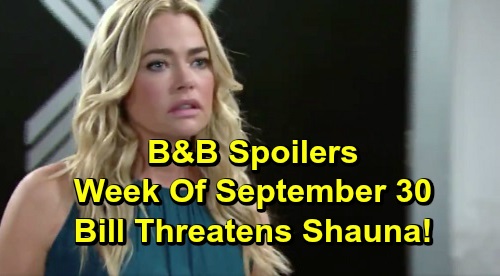 The Bold and the Beautiful (B&B) spoilers for the week of September 30-October 4 tease that we’ll see some stunning moments. For starters, Thomas Forrester (Matthew Atkinson) will set out on a mission to destroy the Logan clan. He’ll start a war in hopes of driving Brooke Forrester (Katherine Kelly Lang) and her family far, far away from the Forresters.

Thomas will begin this battle after Vincent “Vinny” Walker (Joe LoCicero) passes along some useful info. Vinny will provide updates from Danny (Keith Carlos) that could work to Thomas’ advantage. This will involve Ridge Forrester’s (Thorsten Kaye) night with Shauna Fulton (Denise Richards), so Thomas will decide to have a conversation with Danny himself.

Danny will be manipulated into delivering the shocker to Brooke, which should leave Thomas thrilled. B&B fans can expect Brooke to fume over the lies Ridge told her. She’ll naturally want some answers about this clandestine night with Shauna, so it won’t be long until she confronts Ridge. The Bold and the Beautiful spoilers say Ridge will indeed have some explaining to do!

Of course, Ridge didn’t sleep with Shauna – at least not in the way Brooke may assume. He was passed out drunk and never hooked up with Shauna, so he’ll make that crystal clear. Still, Brooke will be hurt over Ridge’s deception. She may not even be sure she buys Ridge’s story, so he’ll definitely be in the doghouse.

Over with Shauna, she’ll make an admission to her frustrated daughter. Florence “Flo” Fulton (Katrina Bowden) will hear the details of Shauna’s kiss, which she planted while Ridge was plastered and out of it. You can bet Flo won’t be happy about that. On top of everything else, Shauna’s feelings for Ridge will be steadily growing. It’ll leave Flo in a panic about the damage Shauna’s desires could do.

Shauna will also have a run-in with Bill Spencer (Don Diamont) in the week ahead. The Bold and the Beautiful spoilers say Shauna will drop by the hospital to show her support. She’ll just want to let Katie Logan (Heather Tom) know she’s thinking about her, but Bill won’t appreciate the visit. He’ll warn Shauna to back off and keep her distance from the Logan ladies.

Later, Shauna will listen to Thomas’ proposition. He’ll think they have a common enemy in the Logans, so he’ll push Shauna to pitch in on his plot. Thomas will suggest that Shauna’s just the person to help him break up “Bridge’s” marriage. He may argue that Shauna would be a far better match for Ridge than Brooke.

After Hope reveals her worries, Liam will make her a promise. He’ll vow to do whatever he can to keep Thomas away from Douglas, so they’ll work together on their goal. Thomas won’t make it easy, so The Bold and the Beautiful spoilers say some hot drama’s in store. We’ll keep you posted as other B&B news comes in. Stay tuned to the CBS soap and don’t forget to check CDL often for the latest Bold and the Beautiful spoilers, updates and news.