BY Heather Hughes on September 2, 2019 | Comments: one comment
Related : Soap Opera, Spoiler, Television, The Bold and the Beautiful 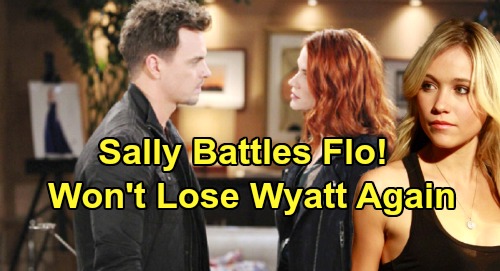 The Bold and the Beautiful (B&B) spoilers tease that Sally Spectra (Courtney Hope) will proceed with caution. She was heartbroken after things fell apart with Wyatt Spencer (Darin Brooks). The fact that he moved on so quickly with Florence “Flo” Fulton (Katrina Bowden) really twisted the knife.

However, Sally’s mistakes proved quite trivial compared to Flo’s. Wyatt now sees he was wrong and will attempt to sweetly move himself out of the doghouse. It won’t take long since Sally’s already softening. She’ll soften even more after some playful moments between them on September 2. The Bold and the Beautiful spoilers say it’ll feel like old times.

Sally and Wyatt will find a familiar groove as they enjoy some fun banter. They’ll surprise themselves by kissing passionately, which should help them realize how strong their connection is. Of course, Sally won’t forget the pain she endured recently. She’ll try to protect her heart a bit, which is wise after what she’s been through.

Even so, Sally loves Wyatt too much to keep those walls up. She’ll fall hard fast once again. That could be a problem since Flo won’t give up on her own connection with Wyatt. They were high school sweethearts who found their way back to each other. Flo will hate that their second chance didn’t pan out, but she won’t think it’s too late for a third. She’s got nothing left to lose, so she’ll go all in on her mission.

Naturally, Flo has to get out of jail first! She’s stuck in a legal mess, but it looks like she’ll ultimately wiggle out of that with Shauna Forrester’s (Denise Richards) help. There’ll eventually be nothing standing in Flo’s way – except for fierce Sally! You can bet Sally won’t give up Wyatt without a fight. She won’t be keen on letting this lying fake birth mom come around and steal her man again.

It sounds like we could have another serious war brewing. Battles seem to be the name of the game as we head into some hot fall stories on B&B. The Bold and the Beautiful spoilers say the action will heat up as several characters fight for what they want and force some risky situations.

Are you rooting for Sally to thwart Flo? Will Sally emerge victorious or will Wyatt let her down again? We’ll give you updates as other B&B news comes in. Stay tuned to the CBS soap and don’t forget to check CDL often for the latest Bold and the Beautiful spoilers, updates and news.