The Bold and the Beautiful Spoilers: Hope and Steffy Kick Liam To The Curb – Double Rejection Over Thomas Rage?

BY Heather Hughes on August 27, 2019 | Comments: one comment
Related : Soap Opera, Spoiler, Television, The Bold and the Beautiful 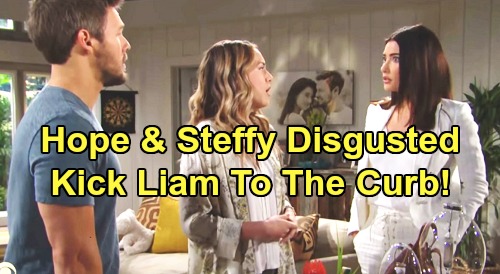 However, Hope Logan (Annika Noelle) may not be too happy about that either. This isn’t the time to spew hatred at Thomas, no matter how many mistakes he’s made.

Even so, Liam won’t be willing to give Thomas any kind of pass. Since Thomas’ redemption seems to have started, he may defend Brooke Forrester (Katherine Kelly Lang) after he wakes up. That’s the kind of thing that would touch Hope’s heart and earn Thomas some gratitude – at least from her. She might see the good she once saw in Thomas again – the vulnerable father who wants to do the right thing.

Of course, Liam will remain wary and that could cause major conflict. He may feel like Thomas is pulling the wool over Hope’s eyes all over again. Hope may argue that Thomas wants to get better, especially for his son’s sake. She might think Thomas simply wasn’t well and needs to get his life back on track.

With Thomas’ attitude change and a diagnosis from Dr. Jordan Armstrong (Vincent Irizarry), Hope may view this as a medical issue and quickly show compassion. Steffy Forrester (Jacqueline MacInnes Wood) may feel the same way since this is her brother. She’ll surely want to see the good in Thomas, too. Families are complicated, but Steffy still loves her bro and may side with Hope on this one.

That could leave Liam standing alone. He’s B&B’s leading man, so he won’t stay lonely and love interest-less for long. Still, it wouldn’t hurt to see it for a little while! Many Bold and the Beautiful fans are fed up with Liam the waffler. On Twitter, there’s been a push for both Hope and Steffy to cut Liam loose!

Viewers Want To See Liam Spencer Suffer For A While

“Liam needs to suffer & stay away from Steffy,” one angry viewer insisted. “Let Steffy find her soulmate and move on with someone that suits her,” said another. One more fan argued that “Steffy nor Hope should want Liam…” A different viewer even asked, “Steffy. Hope. Is this the man y’all were really fighting over for years?”

Even if B&B won’t let Liam stay brokenhearted, it’d be nice to see him rejected by both women for a while. He deserves it for all his waffling over the years, which we’re sure is a trend that’ll continue. The Bold and the Beautiful spoilers suggest Liam will find his way back to Steffy or Hope eventually, but a hint of suffering in the meantime would be great.

It sounds like some hot drama’s ahead on B&B. We’ll give you updates as other news comes in. Stick with the CBS soap and don’t forget to check CDL often for the latest Bold and the Beautiful spoilers, updates and news.