The Bold and the Beautiful Spoilers: Hope and Steffy’s Moms Go to War – Brooke Blasts Taylor Over Adoption

BY Marcy Cohen on January 20, 2019 | Comments: one comment
Related : Soap Opera, Spoiler, Television, The Bold and the Beautiful 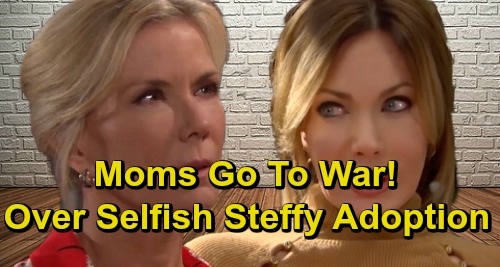 The Bold and the Beautiful (B&B) spoilers tease that Liam Spencer (Scott Clifton), Hope Spencer (Annika Noelle) and Steffy Forrester (Jacqueline MacInnes Wood) will remain key players in the baby turmoil. Steffy will be busy adopting a new daughter while Hope and Liam keep mourning the daughter they’ve lost. It’ll make for an interesting blend of bliss and damage in the coming weeks.

Of course, one woman’s Beth Spencer is another woman’s “Phoebe” Forrester (Rosalind Aune and Isabella de Armes)! Dr. Reese Buckingham (Wayne Brady) appears to have swapped a very much alive Beth with a dead baby on Catalina Island. “Lope’s” seemingly mourning for a child that’s just fine while Steffy prepares to adopt her.

Steffy’s actions will bring loads of drama to Hope and Liam’s lives, but we can’t forget about the other crucial characters in this story. After all, Dr. Taylor Hayes’ (Hunter Tylo) involvement with Reese is what made this adoption possible. She gushed about how much Steffy wanted to a sister for Kelly and gave Reese his bright idea.

Reese will be left out of this for as long as possible, but the adoption itself will still make waves. Taylor will naturally be thrilled over Steffy’s sweet addition. She’ll be proud of her daughter for taking the leap and making this happen for Kelly. Taylor will believe these B&B sisters will thank Steffy for it later.

However, not everyone will share Taylor’s enthusiasm for this daring move. Hope will undoubtedly have a big reaction sooner or later, but there’s another one we can look forward. How will Brooke Forrester (Katherine Kelly Lang) react to this huge news? She’ll only be concerned about Hope’s well-being, but Taylor will only be concerned about Steffy’s satisfied dreams.

The Bold and the Beautiful spoilers hint that Brooke may blast Taylor over this. She’ll most likely accuse Taylor of pushing Steffy into it. Brooke may argue that it’s incredibly hurtful for Steffy to adopt a baby right now. She’s seen what a mess Hope is firsthand, so she’s bound to think this is appalling.

If Brooke starts presses for details, Reese could start to sweat. Brooke may become a threat that has to be contained. Regardless, The Bold and the Beautiful spoilers say some startling showdowns are on the way. We’ll give you updates as other B&B details emerge. Stay tuned to the CBS soap and don’t forget to check CDL often for the latest Bold and the Beautiful spoilers, updates, and news.