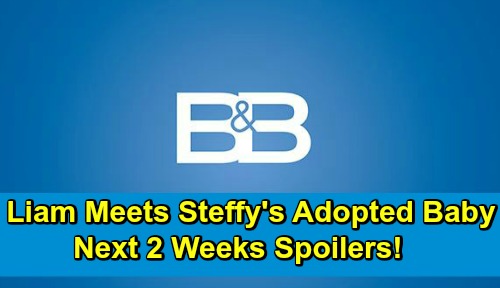 The Bold and the Beautiful (B&B) spoilers for the next two weeks tease that more baby drama is on the way. During the week of January 21-25, Dr. Reese Buckingham (Wayne Brady) will feel the walls closing in. Florence aka “Flo” (Katrina Bowden) won’t be as cooperative as usual. She’ll discover something shocking and realize Reese has quite the agenda.

Flo will feel like she’s tangled up in a far worse scheme than she realizes. She’ll demand answers about how Reese got his hands on that baby. If she’s going to keep helping, Flo will need to know more information.

Faced with the possibility of exposure, Reese will come clean about at least some of his Beth Spencer scheme. Flo won’t like any of this, but Reese will assure her that this is his last resort. He wasn’t willing to let Zoe Buckingham (Kiara Barnes) die, so he had to make a tough call on Catalina Island. Now Reese needs Flo to help him finish the job and get these thugs off his back.

The Bold and the Beautiful spoilers say Flo will remain part of Reese’s team, but she’ll warn him that this isn’t right. Hope Spencer (Annika Noelle) and Liam Spencer’s (Scott Clifton) intensifying grief will prove that. B&B fans can expect them to sink further and further into despair – especially poor Hope. Her world just isn’t the same without Beth and she’s not sure she can ever be happy again.

Nevertheless, Reese will keep his adoption plan going strong. He can’t let himself fret too much about Hope and Liam’s suffering when Zoe’s life is on the line. At an upcoming talent show, a thug will seemingly move in for the kill. Thankfully, Steffy Forrester (Jacqueline MacInnes Wood) will officially agree to the adoption that day. It looks like Reese will get his money in the nick of time.

Elsewhere, Liam will confide in Wyatt Spencer (Darin Brooks) and get a warning in return. Wyatt may feel like Hope could be a mess over Steffy’s new addition. They may try to shield Hope from all that as much as they can. The last thing they need is to pile on more pain for this mourning mother.

During the week of January 28-February 1, Steffy will unknowingly introduce Liam to what we can assume is his own daughter, Beth in the guise of Phoebe (Rosalind Aune and Isabella De Armas). It’ll be a bittersweet experience as Liam holds Kelly Spencer’s (Zoe Pennington and Chloe Teperman) little sister. Liam will try to be happy for Steffy, but this will still sting. He may feel deeply connected to this little one, so that’ll add to his heartache.

Other Bold and the Beautiful spoilers say Reese will ride to the rescue. He’ll derail that talent show we mentioned, which will feature Zoe, Emma (Nia Sioux) and Tiffany (Maile Brady). They’ll all wonder what Reese thinks he’s doing, but the answer is putting an end to his daughter’s nightmare! It sounds like Reese will manage to protect Zoe and hopefully hand over the cash so this can be over.