The Bold and the Beautiful Spoilers: Unhinged Hope Obsessed with Phoebe – Kidnaps Her Own Daughter From Steffy?

BY Marcy Cohen on January 19, 2019 | Comments: one comment
Related : Soap Opera, Spoiler, Television, The Bold and the Beautiful 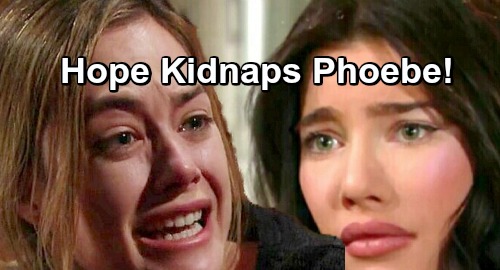 The Bold and the Beautiful (B&B) spoilers tease that Hope Spencer’s (Annika Noelle) downward spiral will continue. Losing Beth Spencer has been the toughest ordeal of Hope’s life. She’s stuck in so much grief that she doesn’t know what to do with herself. Hope is clearly fixated on Beth and the life she could’ve had. Liam Spencer (Scott Clifton) is trying to help, but Hope is practically inconsolable.

Sally Spectra (Courtney Hope) tried to do a nice thing for Hope by bringing over that puppy. It was an ill-advised decision, but Sally just wanted to help. Hope unleashed her fury in a big way, so can you imagine what’ll happen when Steffy Forrester (Jacqueline MacInnes Wood) brings home a new bundle of joy? This could really send Hope spinning out of control!

Liam gave Steffy his approval on this, but he’s not the one to worry about. You can bet Hope will struggle over Steffy’s new little one. The Bold and the Beautiful spoilers say Steffy will agree to the adoption during the week of January 21-25. Thanks to Dr. Reese Buckingham’s (Wayne Brady) sneaky efforts, everything will be squared away rather quickly.

Hope’s emotions are pretty messy right now, so it’s tough to predict how she’ll respond. She could lash out in anger, but she’d probably apologize just like she did with Sally. On the other hand, Hope may simply start sobbing and leave everyone wondering what to do. This is the worst possible timing for Steffy’s adoption. It’s incredibly insensitive, but at the same time, Steffy has to live her own life.

Perhaps Steffy and Liam will think they can help Hope when she’s ready. Liam gets to spend time with Kelly Spencer (Zoe Pennington and Chloe Teperman), but Hope doesn’t have the luxury of an extra kid to cuddle with. Once Hope settles down a tad, Steffy might suggest that some Hope and Phoebe (Rosalind Aune and Isabelle de Armes) bonding would be beneficial.

Even if Steffy doesn’t think it’s a good idea, Hope may insist on it at that point. She might think she’s got something to prove to herself and everyone else. Getting through this without breaking down might be her goal. Naturally, Hope’s bound to feel a strong maternal bond with this baby. It could send her spiraling all over again!

Based on what we’ve seen from Hope so far, it’s fair to say Hope could come completely unhinged. Hope may develop an obsession with “Phoebe,” who is presumably her own daughter. Will Hope resort to kidnapping sooner or later? B&B fans certainly shouldn’t rule it out.