The Bold and the Beautiful Spoilers: Steffy Fulfills Adoption Dream While Hope Lives a Nightmare – Is Steffy Being Selfish? 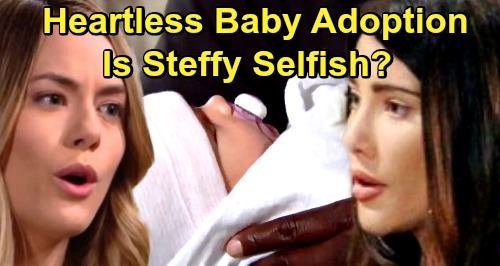 The Bold and the Beautiful (B&B) spoilers tease that Steffy Forrester’s (Jacqueline MacInnes Wood) adoption plans will press on. This is a huge decision, so she’ll take as much time to weigh her options as she can. Of course, Dr. Reese Buckingham (Wayne Brady) will also rev up the pressure and try to get the cash he needs quickly. He can’t afford to let Steffy dawdle on this, so she’ll ultimately just have to make the call.

Since Reese is keeping his name out of this, he’ll coach Florence aka “Flo” (Katrina Bowden) on what to say and do. Flo will convince Steffy that this baby is meant for her. Once Steffy meets this little one, she’ll have no doubt in her mind. Steffy will tear up over “Phoebe” Forrester (Rosaline Aune and Isabella de Armes) and the joy she’s going to bring to Kelly Spencer’s (Zoe Pennington and Chloe Teperman) life.

However, Hope Spencer (Annika Noelle) is feeling anything but joy right now. She’s drowning in devastation, so we have to wonder if Steffy is making the appropriate choice. The Bold and the Beautiful spoilers say Wyatt Spencer (Darin Brooks) will wonder that, too. He’ll express concern to Liam Spencer (Scott Clifton) this week and question Steffy’s motives for adopting.

Liam will undoubtedly defend Steffy. He’ll argue that she shouldn’t let anything hold her back from the dream family she wants. That includes Hope’s crushing grief. Still, Wyatt will worry about the toll this could take on Hope. He’ll fear a major blowup and there’s a good chance there’ll be one eventually.

Who’s right here? Do you agree with Liam, who just wants Steffy to live her best life? Steffy isn’t Hope, so she’s not stuck in that same world of mourning. This shot at a baby just fell into her lap and it could be a long time before she gets another one. Those are decent reasons for going through with this despite Hope’s pain.

At the same time, it’s easy to understand Wyatt’s perspective. In some ways, Steffy seems a little selfish. She fought with Hope about Dr. Taylor Hayes (Hunter Tylo) and whether Beth Spencer could be around her, but they both wanted the same thing deep down.

Hope was frustrated, but she would’ve calmed down in the end and let Kelly have her little sister. She wanted a close relationship for them just as much as Steffy did. Now Steffy is replacing Beth less than a month after Hope’s brutal loss. Some B&B fans might say that’s somewhat cruel.

Steffy’s intention won’t be to hurt Hope, but she has to know she will. Is it a mistake for Steffy to make this all about her and what she wants? We’ll give you updates as other Bold and the Beautiful news comes in. Stay tuned to B&B and don’t forget to check CDL often for the latest Bold and the Beautiful spoilers, updates, and news.