BY hellodrdavis on January 19, 2019 | Comments: one comment
Related : Soap Opera, Spoiler, Television, The Bold and the Beautiful 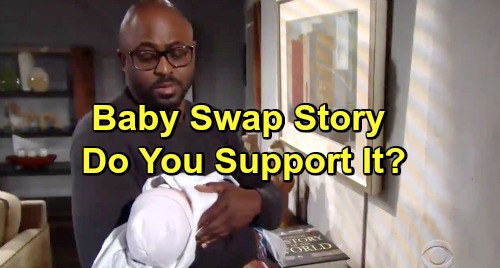 The Bold and the Beautiful spoilers has some news to pass along about a popular B&B star. Wayne Brady, who portrays Dr. Reese Buckingham on the CBS soap, has been getting some pushback from fans over his character’s recent actions.

Reese delivered Hope Spencer’s (Annika Noelle) daughter Beth Spencer, then told Hope and Liam Spencer (Scott Clifton) that the baby died. But later, Reese was shown hiding a newborn baby in his apartment, and there’s a good likelihood that this baby is in fact Beth, who actually survived the delivery. Reese is now offering this baby to Steffy (Jacqueline MacInnes Wood) for a private adoption.

Some fans aren’t too keen on this storyline, nor are they happy with Reese’s actions, especially if it turns out that he kidnapped baby Beth and is going to adopt her out to Steffy for a quick buck. And it seems that a small subset of these unhappy fans are having difficulty separating Wayne from his character.

One of Wayne’s Instagram followers sent him a couple of direct messages, which he copied and reproduced for his fans to see. The messages said, “Ahhh what a terrible role they chose you to play Doctor on the B&B” and “Hope your storyline is over very soon with B&B.”

Wayne responded with the following: “So, this lovely lady, whom I bear NO malice toward btw, and who follows me, decides to DM me. I don’t check those messages regularly nor respond normally, but I got a kick out of this. She’s upset about my role on @boldandbeautifulcbs. She’s not the 1st actually. Soap fans are a loyal bunch and that’s wonderful. Love what you love! That’s what entertainment is for. But don’t get it confused with real life.”

Wayne continued: “For some people seeing me do something like this, has made them talk as if they were responsible for my paycheck and what time I needed be home by! Please save the parenting and strong words for your children! Lol! I’m a big boy and I love my work, no matter the arena in which I choose to do it in.”

And he concluded: “It’s entertainment y’all. You control what you watch. I’m going to take it as a pat on the back that my character Reese has bothered some of you and the story line has made you feel something! That’s the goal. #showbiz PS no bad mouthing or negativity towards her PLEASE! It’s her opinion, but I just wanted to use it as an example.”

Wayne’s post has received a lot of comments from his fans, most of whom are supportive of him and his role on B&B. Several have commented that they realize that Wayne is simply fulfilling a role on the show, and that someone has to play the “bad guy” on a soap, otherwise there is no drama.

Still, it is interesting that some fans blur the lines between actors and the characters they portray. It is not uncommon for soap stars to get grief from fans on social media, or even in public, for the actions that their characters take. It’s got to be frustrating for the actors.

How do you feel about Reese’s current storyline on B&B? Stay tuned to the CBS soap and don’t forget to check CDL often for the latest Bold and the Beautiful spoilers, updates, and news.

So, this lovely lady, whom I bear No malice to, decides to DM me. I don’t check those messages regularly nor respond normally, but I got a kick out of this. She’s upset about my role on… https://t.co/KPEmnTw71b