BY Marcy Cohen on July 8, 2019 | Comments: one comment
Related : Soap Opera, Spoiler, Television, The Bold and the Beautiful 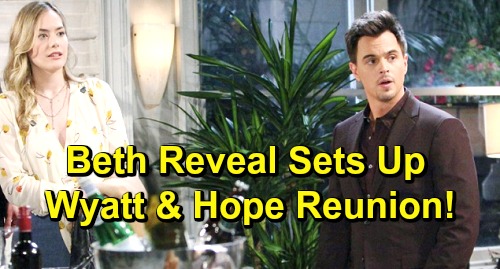 The Bold and the Beautiful (B&B) spoilers tease that a major revelation will affect many characters on canvas. Of course, we’re talking about the big reveal involving Beth Spencer. Reese Buckingham (Wayne Brady) set something huge in motion that night on Catalina Island. There’ll be consequences, rude awakenings and several couple shakeups once the truth about “Phoebe Forrester” (River Davidson and Madeline Valdez) comes out.

Sally Spectra (Courtney) was tossed out like yesterday’s news soon after Florence “Flo” Fulton (Katrina Bowden) hit town. Wyatt didn’t like the fact that Sally kept Thomas Forrester’s (Matthew Atkinson) plan a secret, but that wasn’t the whole story. Since he was busy kissing Flo behind Sally’s back multiple times, Wyatt was clearly eager to find something that would grant him an out.

During the week of July 8-12, Sally will resort to a little manipulation. She still loves Wyatt, so she’ll think she can worm her way back into his heart. Sally will believe she just needs some time alone with Wyatt to make it happen. The Bold and the Beautiful spoilers say Sally will do some mild scheming to keep Flo away, but it probably won’t do any good.

Wyatt Spencer Will Change His Tune Once Flo Fulton Is Exposed

Wyatt’s convinced he’s finally with the woman he’s meant to be with. Now that Flo is back in his life, it’s like Sally flew right out of his head. Wyatt may even see through Sally’s strategy and call her out for meddling in his new relationship. He may push Sally to respect boundaries and let this go. There’s a good chance Sally and Wyatt will have a huge fight that convinces Sally they’re over for good.

Something tells us Wyatt will change his tune once Flo’s exposed as a liar who helped with an illegal adoption. Flo let Hope Logan (Annika Noelle) suffer while she enjoyed the benefits of achieving Logan status.

Will Wyatt Spencer Decide To Go Crawling Back To Sally Spectra?

In the end, Wyatt may go crawling back to Sally, but will she take him? Sally may think it’s too little, too late. She may have even moved on by then. Meanwhile, Liam might be in too deep with Steffy to move backward. Reuniting with Hope may not be what Liam wants at that point.

Ever since Annika Noelle took over the part of Hope, fans of the Wyatt and Hope pairing have been eager to see a reboot. Could this be B&B’s chance? Wyatt’s sure to feel guilty about Flo’s role in all this. He’ll hate that he trusted Flo and didn’t see any warning signs.

The Bold and the Beautiful spoilers say Hope and Wyatt could wind up bonding over the betrayal. Since Flo is Hope’s cousin and Hope considers her a friend, she should understand why Wyatt was duped just like she was. Is the show setting up a Wyatt and Hope reunion?

We’ll give you updates as other B&B details emerge. Stay tuned to the CBS soap and don’t forget to check CDL often for the latest Bold and the Beautiful spoilers, updates and news.