The Bold and the Beautiful Spoilers: Hope Declares Love For Liam – Takes Him From Steffy Once Again 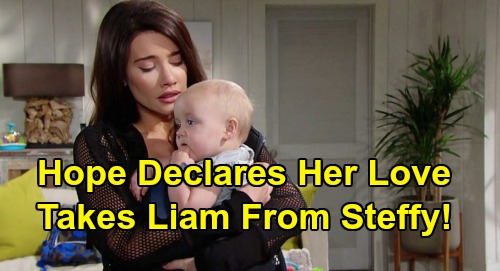 The Bold and the Beautiful spoilers tease that Hope Logan (Annika Noelle) will be feeling whole again. She’s just learned that her daughter Beth Spencer (River Davidson and Madeline Valdez) is alive, and it’s truly the miracle she never thought would come. She’ll be thrilled to hold her daughter in her arms once again and to reclaim the family she thought she had lost forever.

Soon, Hope will want to take Beth home with her, and this will naturally cause some conflict between her and Steffy Forrester (Jacqueline MacInnes Wood), since Steffy has been operating under the assumption that she’s “Phoebe Forrester’s” mom for months. It’s going to be a difficult handoff for Steffy, but ultimately B&B spoilers say that Hope will take Beth home.

And chances are, Liam Spencer (Scott Clifton) will be right by Hope’s side as she creates a new home for her daughter. Of course, Liam and Hope are no longer married, and Hope is married to Thomas Forrester (Matthew Atkinson), but those are just details at this point. After learning everything that Thomas did to obfuscate the truth and keep Beth away from her, Hope is going to want an annulment as soon as possible.

The Bold and the Beautiful spoilers say that Hope, Liam, and Beth will share some touching moments together as Hope brings Beth home. But soon, they’ll have to have a discussion about what they’re all going to do going forward. Hope will have Beth, but what will Liam do from here? He’s got two families now, one with Steffy and one with Hope. And he’s now got two little girls to think about.

Well, it looks like Hope is going to know exactly what she wants. B&B spoilers say that once she brings Beth home and her family is back together, she’ll confess her love for Liam once again. And chances are, Liam will reciprocate the sentiment – after all, he’s been pretty clear all along that he never stopped loving Hope and that he never wanted to annul their marriage.

But does this mean that Hope and Liam will automatically get back together and reunite as a family with Beth? Time will tell, but it’s certainly looking that way. And if that happens, then Liam’s going to have to leave Steffy once again, which she probably won’t appreciate at this point. Sure, Liam and Steffy weren’t back together as a couple, but they did share a night together.

And more importantly, Liam’s living situation with Steffy put him closer to his daughter Kelly Spencer (Chloe Teperman and Zoe Pennington), and Steffy probably won’t appreciate Liam up and leaving Kelly behind to go be with his other family. It could very well lead to some hurt feelings and tension between the three adults.

Of course, we have to remember that back when Hope was pregnant with Beth, she made a big point of declaring that Beth and Kelly wouldn’t be able to be raised as sisters because of Taylor Hayes’ (Hunter Tylo) involvement in Kelly’s life. Will that still be the case now, and will Hope still maintain that they all can’t be a happy family together?

If that’s the case, then Liam’s decision to leave Steffy’s house to go be with Hope and Beth would be a big step that would essentially cut Liam out of a good deal of Kelly’s life. Steffy may have a problem with that, and ultimately if Lope get back together, Hope will be taking Liam from Steffy (and Kelly) all over again.

It will be interesting to see exactly how Liam decides to handle the situation between his two families, assuming that he and Hope do reunite and become a nuclear family with Beth. Do you think that Lope will quickly reunite? Stay tuned to the CBS soap and don’t forget to check CDL often for the latest Bold and the Beautiful spoilers, updates, and news.