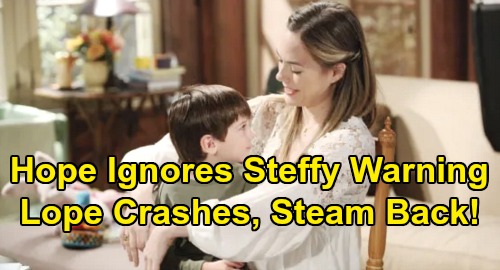 The Bold and the Beautiful (B&B) spoilers tease that Steffy Forrester (Jacqueline MacInnes Wood) may have a choice to make. B&B fans know Steffy warned Thomas Forrester (Matthew Atkinson) about his optimistic view of the situation. Thomas believes Hope Logan (Annika Noelle) sees him in a new light now. He feels it’ll take time, but he’s certain they can have the relationship he wants.

Steffy has plenty of doubts about that, especially since the relationship they had before was built on lies. Of course, Steffy isn’t too happy about how Hope handled the custody issue, and she doesn’t approve of Hope covering up Thomas’ “death” either. Even so, Steffy could battle some concerns down the line. She may see Hope being drawn into Thomas’ web and worry about her brother’s mental stability.

This could leave Steffy in a bit of a bind – especially since Thomas’ plan will involve getting Liam Spencer (Scott Clifton) out of the way. Steffy surely knows she’d have a real shot with Liam if he weren’t with Hope. Many B&B fans would rather see Steffy move on with a new man, but we can’t ignore all the recent “Steam” bonding scenes. The writers aren’t just throwing those in for no reason.

The Bold and the Beautiful spoilers seems to be gearing up for a Steffy and Liam reunion, but what about Liam and Hope? Their relationship will have to be destroyed if B&B wants a “Steam” reboot. If Steffy catches on and sees signs of Thomas’ manipulation, what will she do? Will Steffy warn Hope or let it go in hopes of scoring Liam for herself?

There’s a chance Steffy might do a little of both. She could try warning Hope early on and get a hostile response. Let’s say Thomas starts using Douglas Forrester (Henry Joseph Samiri) more and more to draw Hope in. He’s bound to do that now that they’re a real family in his eyes. Thomas knows this custody arrangement bothers Liam, so he’ll surely find reasons for Hope to rush to Douglas’ aid constantly.

Thomas has been known to coach Douglas on what to say and do, so he may do more of that as well. Hope adores that kid, which could lead to getting the wool pulled over her eyes. Depending on how far Thomas takes his scheme, Steffy may see major red flags and warn that Thomas is taking Hope for a ride. Unfortunately, Hope may feel like Steffy is still put out about the custody agreement in general. She may not see what’s happening as Thomas pulls her in and alienates Liam.

Steffy may eventually decide that Hope’s made her bed and will have to lie in it. She might sit back, watch the “Lope” destruction show and happily collect her prize! The Bold and the Beautiful spoilers say Steffy and Liam could be poised for a fresh start in the new year, so stay tuned. We’ll give you updates as other B&B news comes in. Stick with the CBS soap and don’t forget to check CDL often for the latest Bold and the Beautiful spoilers, updates and news.