The Bold and the Beautiful Spoilers: Hope in Danger, Thomas’ Twisted Love Turns to Revenge – Liam and Brooke Caught in Horror

BY Heather Hughes on September 4, 2019 | Comments: one comment
Related : Soap Opera, Spoiler, Television, The Bold and the Beautiful 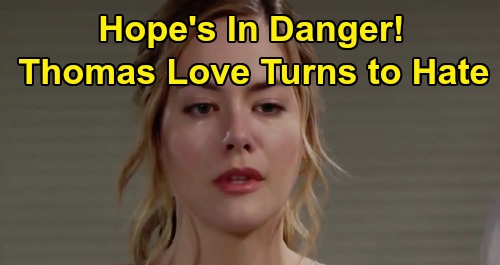 The Bold and the Beautiful (B&B) spoilers tease that Hope Logan (Annika Noelle) could still be at risk. Thomas Forrester (Matthew Atkinson) seemed remorseful when he woke up in the hospital and delivered a heartfelt apology. He also seemed remorseful when he was trying to apologize by the cliff’s edge. However, none of that means Thomas is stable or no longer a threat to Hope.

B&B fans have watched Thomas’ obsession with Hope drive the story for months. He was completely fixated to the point that he tormented his own child. Douglas Forrester (Henry Joseph Samiri) endured manipulation and emotional abuse thanks to Thomas’ twisted plans.

The Bold and the Beautiful viewers can’t forget about Thomas drugging Liam Spencer (Scott Clifton) either. That decision led to Liam sleeping with Steffy Forrester (Jacqueline MacInnes Wood) and added to the mess. Of course, there was also that chilling moment where Thomas smirked at dead Emma Barber (Nia Sioux) after her crash. Thomas showed his true colors and will inevitably show them again.

Of course, Thomas may show them in a different way this time. Hope certainly has no intention of reuniting with Thomas or trusting him in any way. He covered for Brooke Forrester (Katherine Kelly Lang), but that whole cliff situation wouldn’t have happened if Thomas wasn’t so insistent. If a woman’s visibly disturbed and running away, you don’t hunt her down and grab her to apologize.

Thomas may want Hope back, but he won’t get his wish anytime soon. In fact, Hope and Liam will decide to push for custody of Douglas. They just won’t buy that Douglas is safe in Thomas’ care, and Brooke will back them up. That’s sure to rile Thomas up and cause major problems. It could easily turn Thomas’ obsession with Hope into an obsession with revenge!

Thomas was focused on winning over Hope before, but now he’ll be focused on raising his son. When Thomas gets fixated on something, he gets aggressive and goes too far. That’s just how Thomas operates. This could easily bring extreme danger for Hope, Liam and even Brooke if they aren’t careful.