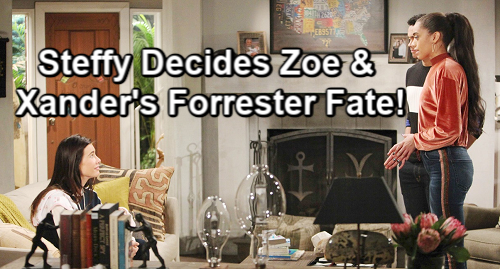 The Bold and the Beautiful (B&B) spoilers tease that Steffy Forrester (Jacqueline MacInnes Wood) will try to shift her focus. She’s undoubtedly been dwelling on the loss of “Phoebe Forrester” aka Beth Spencer (River Davidson and Madeline Valdez) off screen, but she’ll want to concentrate on what she has left. Steffy still has Kelly Spencer (Zoe Pennington) to love and care for. That doesn’t take away Steffy’s pain of losing “Phoebe,” but it does give her something to cling to as she moves forward.

Steffy wants to set a good example for her little girl and show her that life doesn’t have to get you down. She’ll plan to rise up out of this pit of despair and fight for a brighter future.

Steffy will remain an involved mom at home, but she’ll also find a much-needed distraction at Forrester Creations. There’ll be a big fashion show this fall, so that’ll give Steffy a project that she can make a huge success.

The Bold and the Beautiful spoilers say Steffy will face some battles and big decisions along the way. It looks like there could be some tension with Hope Logan (Annika Noelle), which Liam Spencer (Scott Clifton) may get caught in the middle of. The Beth reveal fallout will continue as it spills over into business drama. Some other surprising characters will be part of that chaos.

Zoe Buckingham (Kiara Barnes) and Xander Avant (Adain Bradley) will vow to reclaim their good names. They won’t want to be shunned at Forrester forever, so they’ll work hard to find redemption.

Zoe will be particularly determined, so maybe she’ll convince Steffy she deserves another shot. With that fashion show coming up, they’re going to need a stunning showstopper model.

Zoe Buckingham Will Do What It Takes To Redeem Herself

Of course, there’s bound to be some initial conflict. Steffy will inevitably make life miserable for Zoe in the beginning, but she could change her tune down the road. B&B fans know Steffy’s a great businesswoman. If she feels a working relationship with Zoe is still in the best interest of the company, she’ll probably go for it.

Regardless, The Bold and the Beautiful spoilers say Zoe will do whatever it takes to make Steffy see her in a better light. The same goes for the rest of the Forresters. Perhaps Zoe can even help thwart Thomas’ attempts to take the throne. She’ll definitely remain fearful about Thomas’ agenda.

Can Zoe redeem herself and find a way forward? Will Steffy and Zoe end up making a solid team? We’ll give you updates as other B&B news comes in. Stay tuned to the CBS soap and don’t forget to check CDL often for the latest Bold and the Beautiful spoilers, updates and news.