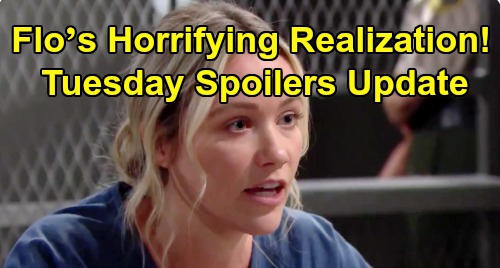 The Bold and the Beautiful (B&B) spoilers update for Tuesday, September 3, tease that Brooke Forrester (Katherine Kelly Lang) will be in shock over Ridge Forrester’s (Thorsten Kaye) stance. She’ll face more pushback on the whole Thomas Forrester (Matthew Atkinson) situation, and it’ll just boggle her mind. Ridge will continue to view Brooke as the guilty one if all of this, so their conflict will get far worse.

B&B fans know Thomas cut Brooke a break by insisting no one pushed him. Brooke’s shove actually caused Thomas’ fall, so Ridge feels she owes him for his silence. He urged Brooke to thank Thomas, but she wasn’t having it. Brooke viewed Thomas as a threat in that moment, and she doesn’t buy this apologetic version of himself he’s trying to sell. She still feels like Thomas should pay for his mistakes.

On Tuesday, Ridge and Brooke’s clashing will rev up. He’ll think she’s ungrateful and way out of line, but Brooke will be adamant that Thomas is still manipulating her daughter. Brooke will hold firm on the fact that all she’s ever tried to do is protect Hope Logan (Annika Noelle), but Ridge just won’t see it like that. He’ll feel Brooke targeted Thomas, so he’ll completely dismiss her story and leave Brooke hurt.

Other Bold and the Beautiful spoilers say Florence “Flo” Fulton (Katrina Bowden) will get another visit from her mother. It won’t be a pleasant one for a couple different reasons. For starters, Shauna Fulton (Denise Richards) wasn’t able to secure bail money and legal help fees. She did her best to get Quinn Forrester (Rena Sofer) on board, but her request was denied.

However, Quinn could have a change of heart as Wyatt Spencer (Darin Brooks) and Sally Spectra (Courtney Hope) heat up again. Quinn tends to hold grudges – but only against the people she doesn’t like. Flo and Shauna may get another chance down the road, especially since Quinn’s not fond of Wyatt’s favorite feisty redhead. Sally has some battles in her future, so she’d better be ready!

Flo will indeed gain her freedom eventually and work to win back Wyatt, but she’ll get bad news for now. The Bold and the Beautiful spoilers say Flo will learn Shauna failed. Shauna may promise to keep trying, but Flo will have to stay put for a while. She’ll also get updates on Thomas’ horrific ordeal, so she’ll realize just how damaging this baby swap secret became.

Flo will feel awful about her role in the chaos and all the pain it led to. She’ll hope she can redeem herself somehow, but she can’t do much of anything sitting behind bars. Fortunately, some intriguing opportunities will present themselves to Shauna soon. Perhaps she can get sneaky and help Flo after all.

It sounds like some exciting twists and turns are ahead. We’ll keep you posted as other B&B details emerge. Stay tuned to the CBS soap and don’t forget to check CDL often for the latest Bold and the Beautiful spoilers, updates and news.