BY Heather Hughes on February 9, 2019 | Comments: one comment
Related : Soap Opera, Spoiler, Television, The Bold and the Beautiful 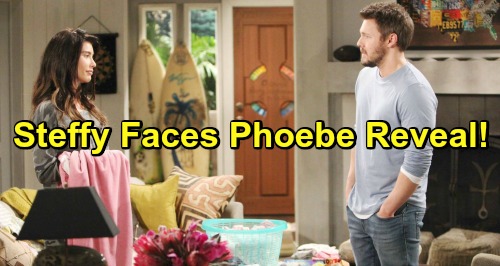 The Bold and the Beautiful (B&B) spoilers update and preview video for the week of February 11-15 tease that we’ll see an unraveling scams and total heartbreak. For starters, let’s talk about Zoe Buckingham (Kiara Barnes) and her mission to learn the truth. She just found the adoption papers, so she knows Florence “Flo” Fulton (Katrina Bowden) put her name down as the baby’s birth mother.

However, Zoe took one look at Flo’s trim body and suggested she certainly hadn’t given birth recently. Zoe will continue to shout accusations, but she’ll be deceived at first. The Bold and the Beautiful spoilers say Flo will offer a phony story and hope it at least buys her some time.

After Zoe takes off again, Flo will reach out to Dr. Reese Buckingham (Wayne Brady) and wonder what to do. She’ll insist that Reese’s nosy daughter could blow this for both of them. Zoe will mull over Flo’s claims and decide that none of this adds up. She’ll return for another confrontation and get Flo to admit that she’s not the true birth mom.

The Bold and the Beautiful spoilers say Zoe will shout that Steffy Forrester’s (Jacqueline MacInnes Wood) adoption isn’t legal. She’ll push Flo to tell her everything or else she’s going to the cops! Zoe will add that she’ll definitely be bringing Steffy in the loop unless Flo spills all right then and there.

Flo won’t completely come clean, but she’ll express remorse for her actions. She’ll insist that she never meant to get caught up in something like this. Flo will note that she cares about Reese and just wanted to help him out. She’ll argue that she let her feelings get in the way of doing what’s right.

B&B spoilers say Flo will leave Hope Spencer’s (Annika Noelle) name out of it, but this shouldn’t be too hard for Zoe to figure out. Reese has been upset over what happened on Catalina Island and this baby is just the right age to be Beth Spencer.

While Zoe works on solving this mystery, Wyatt Spencer (Darin Brooks) and Sally Spectra (Courtney Hope) will enjoy a Valentine’s Day that’s both steamy and sweet. They’ll be glad they have each other to celebrate with this year.

It looks like Thorne will admit he wants out of the marriage and present Katie with divorce papers. She’ll cry as she asks why Thorne is doing this. Katie will feel like their life together is just getting started, so she won’t understand why Thorne wants to cut it short.

Thorne will insist it’s for the best, but it’s horrible of him to break this news on or just before Valentine’s Day of all days! Then again, it might be worse for him to pretend and delay the inevitable. The Bold and the Beautiful spoilers say Thorne will be adamant about a split, so Katie will battle plenty of heartache.

It sounds like a great week’s coming up on the CBS soap. We’ll give you updates as other info emerges. Stay tuned to B&B and don’t forget to check CDL often for the latest Bold and the Beautiful spoilers, updates, and news.