The Bold and the Beautiful Spoilers: Reese Returns In A Panic After Zoe’s Illegal Adoption Discovery, Police Threat

BY hellodrdavis on February 9, 2019 | Comments: 4 comments
Related : Soap Opera, Spoiler, Television, The Bold and the Beautiful 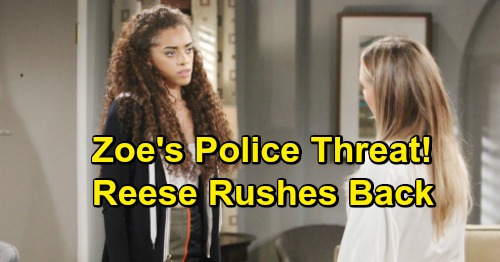 The Bold and the Beautiful (B&B) spoilers tease that Reese Buckingham’s (Wayne Brady) plan to flee Los Angeles and escape the baby swap drama that he’s responsible for may be thwarted. Reese perpetrated a huge scam when he arranged for Hope Spencer (Annika Noelle) and Liam Spencer’s (Scott Clifton) presumed-dead infant to be adopted to Steffy Forrester (Jacqueline MacInnes Wood).

His plan was to put the whole thing behind him and move back to London. Unfortunately for Reese, he left behind a very curious daughter, Zoe Buckingham (Kiara Barnes).

Zoe knows that something doesn’t add up with her dad. It seems to Zoe like Reese is running from something, and she’s bound and determined to get to the bottom of the matter, even though he has skipped town.

Zoe’s curiosity led her straight to her dad’s apartment, where she ran into Florence “Flo” Fulton (Katrina Bowden). Zoe tried to get answers out of Flo, but she was careful not to let on any details about Reese’s baby swap or the illegal adoption she helped perpetrate with him. However, Zoe’s not one to let something go, and she’s going to keep on investigating.

According to B&B spoilers, Zoe will call Reese and she demands answers about who Flo is and what’s going on. Imagine being Reese and getting that call! It will shake Reese to his core and result in his return to Los Angeles.

There’s no indication that Wayne Brady’s done filming at B&B yet, so he’ll likely be back to do damage control where Zoe is concerned. He can’t have her snooping around unabated.

Flo might summon Reese back to Los Angeles. She’s already terrified that Zoe will find out about her role in the baby swap scam, so she may call in Reese when Zoe starts getting closer to the truth.

According to B&B spoilers, Zoe will soon figure out that Flo has something to do with Steffy’s adoption and that is wasn’t legal, so Reese will surely need to come back and get Zoe to back off. In fact, Zoe threatens Flo with the police on new B&B episodes, February 11-15 as fans can see in the weekly promo below.

But how will Reese keep a lid on what he’s done with Zoe relentlessly snooping around? Once Zoe finds out that Reese had something to do with Steffy’s adoption, it’s hard to imagine he can stop her from telling Steffy unless he points out to her that her job at Forrester may be at risk if she squeals.

Whatever tactic Reese uses to keep Zoe from spilling what she knows, he’d better act fast. Do you think he’ll be successful in getting Zoe to keep quiet about his role in Steffy’s adoption? Stay tuned to the CBS soap and don’t forget to check CDL often for the latest Bold and the Beautiful spoilers, updates, and news.