The Bold and the Beautiful Spoilers: Katrina Bowden Talks About Flo’s Guilt, Being a Logan and Possible Forgiveness 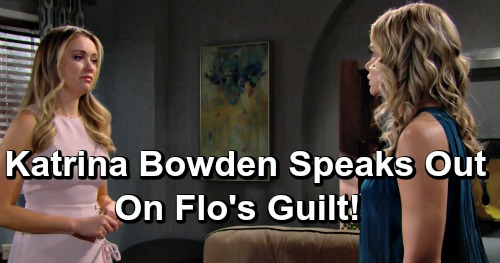 The Bold and the Beautiful (B&B) spoilers tease that Flo Fulton (Katrina Bowden) is dealing with multiple life-changing events in her life. First, she helped Reese Buckingham (Wayne Brady) pull off a massive baby swapping scam. Now, she just found out that her father is Storm Logan (William deVry) making Hope Logan (Annika Noelle) her cousin. It’s all too much too take in for the young woman.

The guilt over helping Reese take Hope’s baby is weighing heavily on Flo. She has to tell someone about her guilt, so she unloads everything on her mother, Shauna Fulton (Denise Richards) — who BTW is completely shocked by the trouble her daughter got herself into.

“Shauna was a single mother raising her daughter, so they have a very close bond and love each other a lot,” Katrina Bowden told CBS Soaps In Depth.

While telling her mother the truth about the baby swap helps relieve some of Flo’s guilt, finding out her Logan roots just adds to the weight of the secret. Katrina explains that it is becoming too much to keep up the lie.

At the same time, Flo isn’t sure how to come clean on the secret either. There is no easy way to tell Hope that she’s been lying to her and her baby is alive.

Another issue for Flo is she doesn’t want to disappoint Wyatt Fuller (Darin Brooks). She knows if he found out the truth, he would be disappointed in her. And, she is still very much in love with him. Wyatt is the man that she never got over and she would do [nearly] anything to get another chance with him. However, if this baby secret comes out, that would never happen.

So, what will Flo do? She will pray that her mother will keep her secret, for now, to give herself more time to figure it all out. Do you think Flo will be forgiven once the baby swap truth is revealed to all? Will she have a future on the show after her crimes are exposed?

Do you think Flo should tell Hope the truth? Will the Logans ever forgive her? Don’t forget to come back to CDL later for more The Bold and the Beautiful (B&B) spoilers, news, and casting updates!