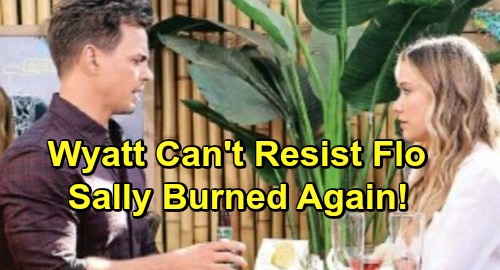 The Bold and the Beautiful (B&B) spoilers tease that Wyatt Spencer (Darin Brooks) will be surprised to see a face from his history. He’ll bump into an ex who’s working at Bikini Bar – and helped with the illegal adoption scheme. Florence “Flo” Fulton (Katrina Bowden) is about to get a real blast from the past.

Of course, Wyatt won’t know about any of the “Phoebe Forrester” (Isabella de Armas and Redford Prindiville) drama just yet. He’ll simply see his former flame and want to catch up. The Bold and the Beautiful spoilers say Wyatt will want to offer an apology. It turns out Wyatt and Flo were high school sweethearts, but circumstances beyond their control drove them apart.

Quinn Forrester (Rena Softer) ran into some trouble some trouble suddenly and forced Wyatt to leave town with her immediately. They had to make their getaway in the middle of the night, so Wyatt never got to tell Flo goodbye or offer an explanation. It was devastating for both of them at the time, but each one found a way to move on.

However, seeing Flo again will bring back memories and stir up old feelings for Wyatt. He’ll still have a familiar connection with Flo, but B&B spoilers say he’ll try to fight it. Wyatt has found happiness with Sally Spectra (Courtney Hope). He won’t want to blow up their romance over ancient history, but something deep inside will still draw him to Flo.

The fact that they left things so unresolved back then will weigh on Wyatt. It wasn’t his fault, but he’ll still feel guilty about bailing. Flo will undoubtedly admit she was crushed, so that should add to Wyatt’s heartache.

In the latest issue of Soap Opera Digest, Darin Brooks suggested that Flo’s reentrance into Wyatt’s life will bring up “feelings that he has not dealt with.” Brooks also noted that “there may be a bit of unrequited love there” and called the situation “complicated.” It certainly sounds like Sally’s got some competition!

How long will Wyatt be able to fight his feelings for Flo? Will poor Sally get burned once again? The Bold and the Beautiful spoilers say this story may be headed in that direction, so don’t miss all the action. We’ll give you updates as other B&B news comes in. Stay tuned to the CBS soap and don’t forget to check CDL often for the latest Bold and the Beautiful spoilers, updates, and news.