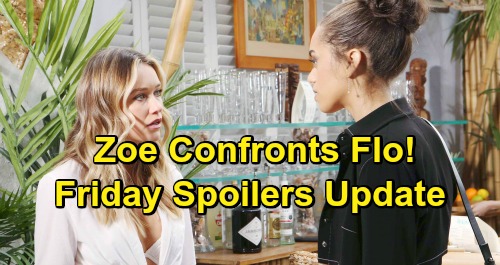 The Bold and the Beautiful (B&B) spoilers for Friday, March 1, tease that Wyatt Spencer (Darin Brooks) and Sally Spectra (Courtney Hope) will be ready to roll. They’ll plan to get started at Spencer Publications, but things won’t go smoothly on day one. Bill Spencer (Don Diamont) just wouldn’t be “Dollar Bill” without a bombshell or two.

Wyatt secured a deal for Sally, so she’s excited about her making her fashion house dreams a reality again. Unfortunately, there’ll be a slight snag. Bill will push for a few changes to the original agreement. That could leave Sally and Wyatt upset at first, but this could actually be a good thing. Bill’s on a better path now, so maybe he’ll offer something that can benefit all of them.

While Bill talks business with Sally and Wyatt, Zoe Buckingham (Kiara Barnes) will run into the last person she wanted to see. The Bold and the Beautiful spoilers say Florence “Flo” Fulton (Katrina Bowden) will be working at the Bikini Bar, so Zoe will explode. She thought Flo would be long gone by now.

Zoe will certainly wonder what angle Flo’s working. Why would Flo take such a huge risk by sticking around? Zoe will hope to find out when she corners Flo and demands answers on Friday. B&B fans can expect some harsh words to be exchanged, but they won’t change anything. Zoe will push Flo to head back to Las Vegas, but her demands will be ignored.

It seems Flo’s guilt will keep her nearby for now. There may not be much left for her in Vegas anyway, so Flo will focus on her new life in Los Angeles. It’s not like Zoe can blab without ratting out her father, Dr. Reese Buckingham (Wayne Brady). Flo may remind Zoe of that before she gets back to tending bar. She’s in LA to stay, so Zoe had better get used to it!

Of course, that doesn’t mean Zoe will relax. She’ll want to keep a close eye on Flo in the coming weeks and make sure she doesn’t betray Reese. The Bold and the Beautiful spoilers say Zoe will have to clean up some major messes, but she’ll do her best to protect her dad.

B&B viewers won’t want to miss Friday’s exciting episode. We’ll give you updates as other news emerges. Stick with the CBS soap and don’t forget to check CDL often for the latest Bold and the Beautiful spoilers, updates, and news.