The Bold and the Beautiful Spoilers: Bill’s Realization – Discovers Why Quinn Is So Hard On Wyatt’s Women

BY hellodrdavis on April 15, 2019 | Comments: one comment
Related : Soap Opera, Spoiler, Television, The Bold and the Beautiful 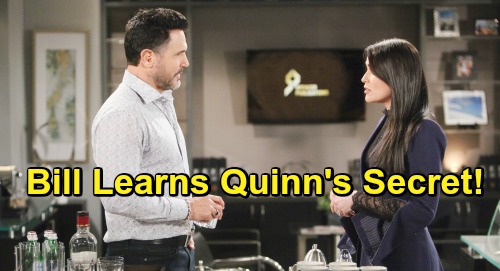 The Bold and the Beautiful spoilers tease that Bill Spencer (Don Diamont) will do some more soul searching. He’s really made inroads over the past few months, transforming from ruthless “Dollar Bill Spencer” into a more gentle, loving man. Of course, parts of the old Bill are still there, but he’s much more sensitive to his family’s needs than he used to be, and he’s becoming a real family man.

Bill has really come around where his youngest son, Will Spencer (Finnegan George) is concerned. Bill went from an absentee father who was spending all of his time chasing Steffy Forrester (Jacqueline MacInnes Wood), to an attentive, loving dad who really connects with Will. Katie Logan (Heather Tom) has really noticed his efforts and she’s happy about the renewed relationship between Bill and Will.

Bill’s even made inroads with his adult sons. Liam Spencer (Scott Clifton) can now stand to be in the same room with Bill (which is saying something, after what Bill did to Liam), and Wyatt Spencer (Darin Brooks) is now back to work at Spencer Publications with his father. And that’s saying a lot, considering that at one point, Bill actually disowned Wyatt and took back the “keys to the kingdom.”

Speaking of Wyatt, B&B spoilers say that Bill’s going to get some special insight into his son’s life. Of course, Bill didn’t raise Wyatt or even know that he existed until a few years ago when Quinn Forrester (Rena Sofer) spilled the beans about Bill being Wyatt’s dad. And it doesn’t seem that Bill has ever given much thought to Wyatt’s childhood or even to his relationship with Quinn.

There’s certainly no love lost between Bill and Quinn, and until recently Bill wasn’t really motivated to consider how his absence in Wyatt’s life affected either Quinn or Wyatt over the years. But it looks like he’ll soon realize something important about the dynamic between Quinn and Wyatt.

According to B&B spoilers, something will happen to make Bill notice how Quinn treats the women in Wyatt’s life. Perhaps Quinn will make an off-handed negative remark about Sally Spectra (Courtney Hope), or maybe she’ll come right out and admit something to Bill. At any rate, it looks like Bill will suddenly come to appreciate why Quinn is so hard on the women in Wyatt’s life.

Of course, Quinn has this pattern where she mistreats Wyatt’s girlfriends. She wasn’t happy when Wyatt was with Katie, and she’s not happy now that Wyatt’s with Sally. No matter who Wyatt is with, Quinn would rather disrupt the relationship than support it. She seems to believe that no one is good enough for her son.

B&B spoilers indicate that Bill will come to a realization about why Quinn behaves this way. Perhaps he’ll realize that Quinn’s protective nature comes from years of being a single mom who

just wanted the best for her son. Quinn struggled to raise Wyatt, even though she could have received help from Bill at any time if she had told him he was Wyatt’s father.

But because of the kind of man that Bill was, Quinn didn’t want Wyatt around him. Bill may start to feel responsible for Quinn’s protective nature toward Wyatt. After all, if he had been a better man all those years ago, then maybe Quinn would have told him about Wyatt and he could have helped raise his son. Then Quinn might not have ended up so fierce and protective of Wyatt…and petty when it comes to Wyatt’s girlfriends.

So, it seems that Bill’s self-reflection will continue, and he’ll stay on the path to becoming a better man and a better father. Do you like this version of Bill, or do you miss the old Bill? Stay tuned to the CBS soap and don’t forget to check CDL often for the latest Bold and the Beautiful spoilers, updates, and news.