BY hellodrdavis on April 15, 2019 | Comments: one comment
Related : Soap Opera, Spoiler, Television, The Bold and the Beautiful 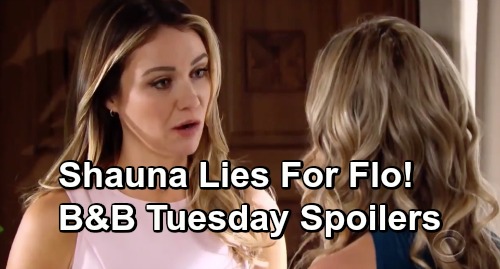 The Bold and the Beautiful spoilers for Tuesday, April 16, tease that Shauna Fulton (Denise Richards) will demand some answers. She’s just heard Hope Spencer’s (Annika Noelle) remark about Florence “Flo” Fulton’s (Katrina Bowden) pregnancy and decision to give her baby up for adoption. Of course, Hope’s under the impression that Flo is Phoebe Forrester’s (Isabella de Armas and Redford Prindiville) birth mother.

It looks like Shauna will reluctantly comply, but she’ll be completely bewildered by what Flo’s up to. Flo will dodge a bullet for now, but sooner or later she’ll have to answer to Shauna about what she’s gotten herself into.

Meanwhile, on the new episode of B&B on Tuesday, April 16, Bill Spencer (Don Diamont) will continue his conversation with Quinn Forrester (Rena Sofer). Quinn has just informed Bill that Flo is Phoebe’s birth mom, and Bill is absolutely stunned. But their conversation will soon drift back to Flo’s relationship with Wyatt Spencer (Darin Brooks).

Of course, Quinn is all gung-ho on pushing Wyatt back together with Flo. And according to B&B spoilers, she’ll soon go on a serious mission to end Wyatt’s relationship with Sally Spectra (Courtney Hope). Quinn and Sally just don’t see eye to eye, and Quinn would much rather Wyatt was with Flo.

Bill may caution Quinn on her plan, and as the two discuss Wyatt’s relationship with Sally, Bill will get a bit of insight on exactly why Quinn is always so hard on Wyatt’s girlfriends. It seems that Quinn’s never happy with who Wyatt chooses. Perhaps it’s because Wyatt choses strong women who remind Quinn of herself. Whatever the reason, Bill will get a clue.