The Bold and the Beautiful Spoilers: Monday, April 8 Update – Shauna Reveals Her Past With Bill – Flo Kisses Wyatt 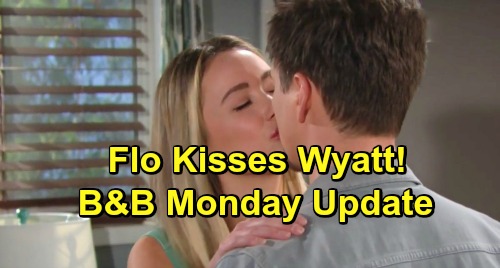 The Bold and the Beautiful spoilers for Monday, April 8, tease that Shauna Fulton (Denise Richards) and Quinn Forrester’s (Rena Sofer) conversation at Forrester Creations will take an unexpected turn. Shauna’s just heard from Quinn that Bill Spencer (Don Diamont) is Wyatt Spencer’s (Darin Brooks) father, and judging by her reaction, that’s the last thing she expected to hear.

According to B&B spoilers, Shauna will then lay some big information on Quinn. She’ll share that she, too, knew Bill back in the day, and that Bill could possibly be Florence “Flo” Fulton’s (Katrina Bowden) father! This would certainly be enough drama for one day, but it seems that at about this time, Bill will waltz into Forrester Creations looking for Quinn to discuss a financial matter.

There will be some awkward moments as Shauna clearly recognizes Bill, but Bill doesn’t remember Shauna. But according to B&B spoilers, Shauna will know what to say to jog Bill’s memory a bit, and that will lead to some even more awkward moments between Shauna, Bill, and Quinn. Of course, Quinn will be reeling from the news that Shauna and Bill once slept together, and from the possibility that Wyatt and Flo are half-siblings!

Meanwhile, on the new episode of B&B on Monday, April 8, Flo and Wyatt will continue their conversation about their respective fathers at Flo’s place. Flo has submitted her DNA profile to a national database, and she’s hoping that it will soon reveal the identity of her father. She really appreciates Wyatt’s support in the whole process, and his willingness to share the details of his own dad search with her.

Of course, Flo has no idea that her dad and Wyatt’s dad may just be one in the same. She’ll find out about that development soon enough, but for now she’ll just be focused on her gratitude toward Wyatt for being so helpful and welcoming toward her. B&B spoilers say that she’ll have some sweet words for Wyatt.

But words aren’t all she’ll give Wyatt. It seems that Flo will temporarily forget that Wyatt’s got Sally Spectra (Courtney Hope) in his life, and she’ll get caught up in a moment and plant a big kiss on Wyatt! This will be the second time that Flo has kissed Wyatt, but of course the first time she didn’t yet know about Sally.

B&B spoilers say that Wyatt will be quite surprised by Flo’s bold move. Wyatt’s an honorable guy, so he’ll probably end up backing away from the kiss and reminding Flo that he’s taken, but now he’ll have a dilemma on his hand. There could certainly be some awkwardness going forward with Flo, and Wyatt will have to decide whether to come clean with Sally about the kiss.