The Bold and the Beautiful Spoilers: Hope Is Thomas’ Next Drugging Victim – Obsessed Groom Insists on Consummating Marriage? 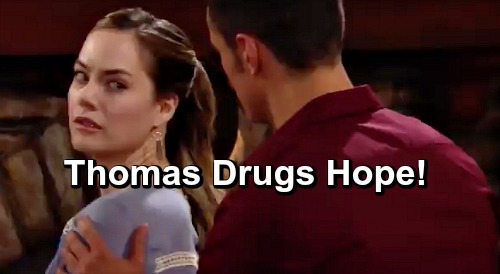 The Bold and the Beautiful (B&B) spoilers tease that Thomas Forrester (Matthew Atkinson) will be over the moon when Hope Logan (Annika Noelle) accepts his proposal. This is exactly what he hoped for when he roped Douglas Forrester (Henry Joseph Samiri) into nudging this process along. Thomas will make one last plea of his own as he tempts Hope with the ring, and his plan will finally pay off.

Of course, Hope won’t want Thomas to get the wrong idea about where she stands. She’s not in love with him and will need an adjustment period. Hope’s most likely counting on a lengthy engagement period to help with that. The Bold and the Beautiful spoilers say Hope will want Thomas to manage his expectations and be patient with her, but he’s just not a patient man.

B&B fans will see Thomas put even more pressure on Hope. She’ll also have plenty of friends and family members telling her what a terrible idea this is. The more they try to tell Hope it’s crazy, the more she’ll bury her head in the sand. Hope won’t see the issue since Liam Spencer (Scott Clifton) has already taken steps toward his future with Steffy Forrester (Jacqueline MacInnes Wood).

Naturally, Hope will argue that she has to take steps forward, too. She’ll contend that it might as well be with Thomas since Douglas so desperately needs and wants a mother. Hope adores that little boy and doesn’t want him to be disappointed. Thomas may use that to his advantage as he tricks Hope into moving their wedding date up. It won’t be long at all until Thomas and Hope are tying the knot.

What does Thomas really expect from Hope once they’re married? Due to her fears about getting pregnant, Hope could barely even have sex with Liam – the man she’s actually in love with. It’s tough to believe Hope will just willingly fall into bed with Thomas on her wedding night.

The Bold and the Beautiful spoilers say Hope will think Thomas is willing to wait for her, but will he opt for another strategy instead? Perhaps Hope will be the next drugging victim. It certainly worked on Liam, so Thomas may think Hope could use a pill or two as well. Will Thomas drug Hope to make her sleep with him? He could be going past the point of no return if he does.

B&B can try to spin this however they want, but this would be rape – plain and simple. If Hope doesn’t want to have sex and Thomas drugs her to make her have sex, there’s no getting around the rape issue. It would taint Thomas beyond repair in many viewers minds and perhaps seal the deal on his death. He may not be a character worth saving at the end of this dark and wild arc.

Do you think Thomas will drug Hope to push her into consummating the marriage? We’ll give you updates as other B&B news comes in. Stay tuned to the CBS soap and don’t forget to check CDL often for the latest Bold and the Beautiful spoilers, updates and news.