BY Heather Hughes on July 7, 2019 | Comments: one comment
Related : Soap Opera, Spoiler, Television, The Bold and the Beautiful 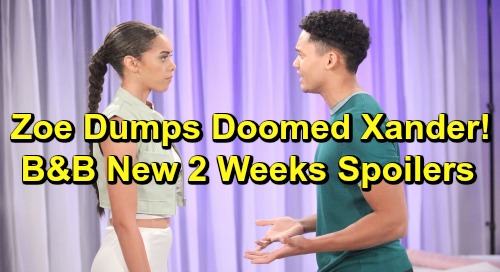 The Bold and the Beautiful (B&B) spoilers for the next two weeks tease that some stunning developments are looming. During the week of July 8-12, Hope Logan (Annika Noelle) will agree to become Thomas Forrester’s (Matthew Atkinson) wife. Liam Spencer (Scott Clifton) certainly won’t be happy about that, so he’ll use his love as a desperate way to prevent this marriage.

However, Hope won’t be persuaded by Liam’s lingering love confession. She’ll refuse to call off the nuptials, so the news will spread to Brooke Forrester (Katherine Kelly Lang). This fierce mom will be appalled by Thomas’ behavior. She’ll be more convinced than ever that Thomas is practically a madman at this point.

The Bold and the Beautiful spoilers say Brooke will try to talk Hope out of marrying Thomas. When that doesn’t work, it looks like Brooke will resort to more drastic measures – at least she’ll try to. Ridge Forrester (Thorsten Kaye) will spoil Brooke and Liam’s plans to wreck the upcoming wedding. They could always try again later, but Ridge will put his foot down for now.

Meanwhile, Xander Avant (Adain Bradley) will gather up even more proof against Thomas. He’ll take everything to Zoe Buckingham (Kiara Barnes) and hope it’s enough to change her mind. Xander will feel like they have to take a stand against Thomas together, but Zoe will stand against Xander instead.

Perhaps Zoe will argue that all of Xander’s evidence is circumstantial. She’ll feel like Xander is jumping to conclusions, but he’ll insist Thomas was responsible for Emma Barber’s (Nia Sioux) death. The Bold and the Beautiful spoilers say their next fight will bring an ultimatum. Xander may insist Zoe’s going to get on board with coming clean or risk losing him forever.

Unfortunately, Zoe will decide there’s just too much at stake. It seems she won’t be willing to turn against Thomas to keep her relationship intact. Xander will likely break up with Zoe, so all these secrets are definitely taking a toll on all parties involved.

B&B fans can also expect a showdown between Xander and Thomas. After Xander confronts Thomas with the proof he’s found, he’ll put himself in grave danger. Thomas is so close to a future with Hope that he can taste it. He’ll refuse to let Xander ruin things, so Xander may be given his final warning. This situation could take a deadly turn if Xander doesn’t let it go.

Next, a dirty trick will result in a moved-up wedding date. Hope will be trapped into agreeing to the rushed ceremony, so Thomas will once again be thrilled. Over with Sally Spectra (Courtney Hope), she’ll see an opportunity and take advantage of it. Sally will send Florence “Flo” Fulton (Katrina Bowden) all over town running errands just so she can have some private time with Wyatt Spencer (Darin Brooks).

There’s a good chance Sally’s move will backfire. She may end up alienating Wyatt if he sees through her scheme. Regardless, more drama’s coming up during the week of July 15-19. Flo’s worries will intensify as she gets in deeper with Wyatt and her fellow secret-keepers cause chaos. It looks like Xander will make matters worse for himself and leave his life in true jeopardy.

Back with Ridge, he’ll be appalled by Brooke’s increasingly negative attitude toward Thomas. The Bold and the Beautiful spoilers say Ridge will call Brooke out for thinking his son’s a monster. They’ll have a major argument about what’s best for Hope and how involved they should be in their children’s love lives.

The next two weeks will bring lots of great action, so stay tuned. We’ll give you updates as other B&B details emerge. Stick with the CBS soap and don’t forget to check CDL often for the latest Bold and the Beautiful spoilers, updates and news.