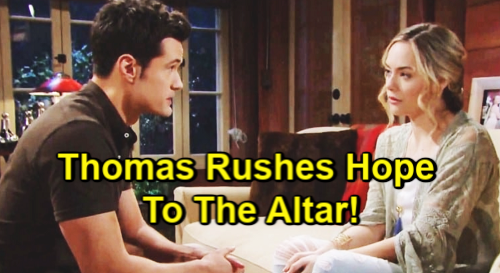 The Bold and the Beautiful (B&B) spoilers tease that Thomas Forrester (Matthew Atkinson) will take a big step forward with Hope Logan (Annika Noelle). After another heavy dose of manipulation, Hope will agree to become Thomas’ wife and Douglas Forrester’s (Henry Joseph Samiri) new mother. She’ll be pretty rattled about accepting the proposal, but she’ll do it anyway.

Later, Liam Spencer (Scott Clifton) will be alarmed by the news of this rushed engagement. He’ll immediately confront Hope about what the hurry is. Liam has made it crystal clear that he doesn’t trust Thomas. This will prove to him that he’s right since Hope obviously isn’t ready to remarry.

Liam will beg Hope to see that it’s too soon and argue that this is all coming from Thomas. He won’t buy that Douglas is so insistent on making Hope’s Mommy title official. She can serve the same role in the boy’s life without a marriage certificate.

Liam Spencer Will Make A Desperate Plea To Stop The Wedding

However, Hope will feel like this is the inevitable outcome. She won’t think Liam needs to worry about it since he’s moving on with Steffy Forrester (Jacqueline MacInnes Wood). The Bold and the Beautiful spoilers say Liam will insist he loves Hope. He’ll make a desperate plea to stop this wedding and presumably reunite.

Liam will assure Hope she’s the one he wants as he works to end this “Thope” nightmare. Unfortunately, Hope won’t listen. She may argue that they won’t tie the knot for a while anyway. Hope might note that they have plenty of preparations to make, so she’ll have more time to process and accept the idea.

Of course, Thomas is eager to begin his new life with Hope. He doesn’t want to waste any more time, so he’ll rely on one of his typical strategies. Thomas always has a trick or two up his sleeve. B&B fans can expect a trap of some sort. After Hope falls right into it, she’ll be convinced to move up their wedding date.

The Bold and the Beautiful spoilers say Hope and Thomas will be all set to wed – and fast! It won’t be long at all until they’re ready to say their vows, but forces will be working against them. Xander Avant (Adain Bradley) and Brooke Forrester (Katherine Kelly Lang) will both try to halt the nuptials in different ways.

It sounds like some great scenes are coming up during the week of July 8-12 and beyond. We’ll give you updates as other B&B details emerge. Stay tuned to the CBS soap and don’t forget to check CDL often for the latest Bold and the Beautiful spoilers, updates and news.