The Bold and the Beautiful Spoilers: Thomas Pays the Price After Beth Reveal – Will He Go to Prison or Is Death Inevitable? 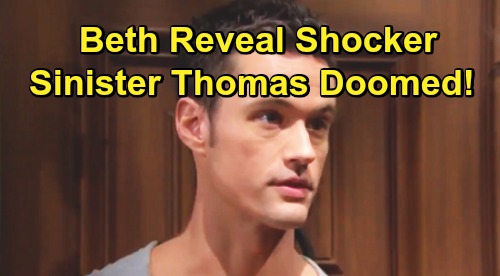 The Bold and the Beautiful (B&B) spoilers tease that Thomas Forrester’s (Matthew Atkinson) deception will deepen. He’ll keep reeling Hope Logan (Annika Noelle) in as he tries to build their bright future.

Of course, Thomas isn’t going to get his wish – at least not for any lengthy period of time. His relationship with Hope is built on lies and dark secrets, so “Thope” is destined to implode.

Thomas has done everything he can to make sure he’s Hope’s main crutch. He wants Hope to be reliant on him. Thomas is always waiting to embrace Hope and offer words of wisdom that really aren’t so wise! Hope’s trusting Thomas more and more every day, which will make it even more infuriating when the truth finally comes out.

Another Character Will Die

This B&B storyline will continue to heat up over the rest of the summer. Some wild twists are in store – and it looks like that’ll include another round of deadly drama. There will likely be a second character killed off in the coming weeks. There’s a chance others will follow depending on how many cast members the show decides they can spare.

In other words, the stakes will be raised as we build toward the big reveal. The Bold and the Beautiful spoilers say Liam Spencer (Scott Clifton) will remain wary of Thomas, especially after Hope agrees to marry him. Their engagement will leave Liam even more convinced that Thomas has too much power over Hope. He’ll be keeping a closer eye on Thomas and potentially looking for ways to trap him.

Liam may be the one to blow the lid off the Beth Spencer secret. As Beth’s father, Liam could finally be the one who has the guts to stand up to Thomas and bring this out into the open. Hope will be overjoyed by the reunion this brings, but what fate awaits Thomas? For starters, you can bet Hope will rip into him with everything she’s got!

Will Thomas Forrester Be Killed?

Since B&B has taken Thomas in such a sinister direction, we wouldn’t be surprised if he met a grim fate. It’s easy to imagine Hope killing Thomas in a fit of rage – even if the act wasn’t intentional. It could be as simple as a confrontation at a great height that sends Thomas tumbling over the edge. The same scenario could play out with Liam if the show wanted to take that route.

Then again, Thomas could also end up in prison for his role in Emma Barber’s (Nia Sioux) death and perhaps bigger roles in full-blown murders. There’ll be much more for Thomas to go down for once it’s all said and done. If Thomas truly loses it toward the end, a mental institution stint is even a possibility.

The Bold and the Beautiful spoilers say they’ll have several options to choose from, but Thomas clearly can’t stick around in this state. Based on his evil behavior, death may be the most likely outcome. We’ll give you updates as other B&B news comes in. Stay tuned to the CBS soap and don’t forget to check CDL often for the latest Bold and the Beautiful spoilers, updates and news.