The Bold and the Beautiful Spoilers: Hope Jealous of Steffy – Sees Message From Steffy On Liam’s Phone

BY hellodrdavis on October 7, 2019 | Comments: 2 comments
Related : Soap Opera, Spoiler, Television, The Bold and the Beautiful 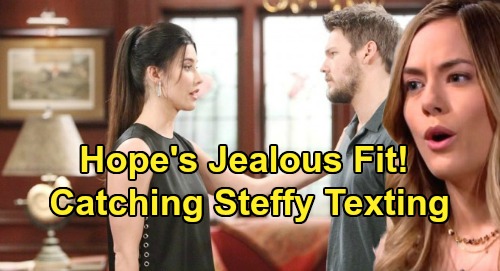 The Bold and the Beautiful spoilers tease that Hope Logan (Annika Noelle) will soon be feeling some familiar emotions. As B&B viewers know, she and Liam Spencer (Scott Clifton) happily reunited after they discovered that Beth Spencer (River Davidson and Madeline Valdez) was alive and well. They’ve been enjoying their time together in the cabin as a happy family with Beth and Douglas Forrester (Henry Joseph Samiri), and there have been relatively few conflicts, the drama with Thomas Forrester (Matthew Atkinson) notwithstanding.

But soon, Hope and Liam are going to have to get back to reality. They can’t stay holed up in their cabin with Beth forever, and at some point, Liam will need to turn his attention to his other daughter Kelly Spencer (Chloe Teperman and Zoe Pennington). And that also means turning his attention to Kelly’s mother, Steffy Forrester (Jacqueline MacInnes Wood).

Liam, Hope, and Steffy will have a big challenge on their hands, and that’s blending their families and their girls into one big extended family. But the fact that Beth was once “Phoebe Forrester” and had a mother/daughter relationship with Steffy will make that tough. Bringing the girls back together for a sisterly relationship will be difficult on Steffy at first, as Hope and Liam are well-aware.

So, with all of this to navigate, some of the familiar difficulties between Hope, Liam, and Steffy are apparently going to arise. According to B&B spoilers, Hope will find a message from Steffy on Liam’s phone, and that will cause her to react. Exactly what the message says remains to be seen, but it’s clearly going to be something that strikes the jealousy bug in Hope. She’ll suddenly find herself concerned about the relationship between Steffy and Liam.

Of course, it doesn’t at all seem like Steffy is interested in Liam at this point. By all accounts, she seems to have resigned herself to the fact that Liam is in love with Hope and wants to live with her and be a full-time dad to Beth. But he’s also Kelly’s dad, and Steffy and Liam will have to communicate about that, so Hope is going to ultimately have to understand that. Unfortunately, it seems that getting to that point may be a challenge.

Hopefully, Hope will simply talk with Liam about the phone message, and things can quickly get resolved. Or are we going to see Hope go through a bout of uncertainty about her relationship with Liam and deep concern about his lingering feelings for Steffy? It certainly seems that Liam has been clear with Hope about the fact that he is committed to her and to her alone, but she may still have insecurities.

At any rate, we’ll see how Hope’s jealousy over the phone message gets resolved, and whether it signals some ongoing problems for Lope and Steffy going forward. Do you think that the triangle between Hope, Liam, and Steffy will become an issue again on the show? Stay tuned to the CBS soap and don’t forget to check CDL often for the latest Bold and the Beautiful spoilers, updates, and news.