The Bold and the Beautiful Spoilers: Hope Scams Thomas For Custody of Douglas – Brings Deadly Danger and Vicious Revenge

BY Heather Hughes on October 30, 2019 | Comments: one comment
Related : Soap Opera, Spoiler, Television, The Bold and the Beautiful 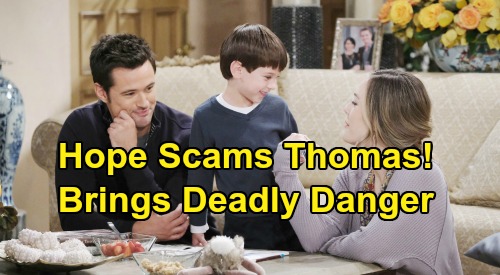 The Bold and the Beautiful (B&B) spoilers tease that Thomas Forrester’s (Matthew Atkinson) fury could drive him down a dark path again. He’s on a mission to push the Logans far, far away from the Forrester family.

Thomas wants Brooke Forrester (Katherine Kelly Lang) out of Ridge Forrester’s (Thorsten Kaye) life, but he has no intention of sparing Hope Logan (Annika Noelle). He’s frustrated by the hold the Logan women have on men, so he’s eager to break Hope and Liam Spencer (Scott Clifton) up.

Since Steffy Forrester (Jacqueline MacInnes Wood) has found her fire again, shoving Hope aside may be easier than Thomas expects. Regardless, Hope and Brooke’s latest custody plot could leave Thomas out for revenge. Trying to steal custody of Douglas Forrester (Henry Joseph Samiri) will cross an infuriating line for Thomas. He could make Hope regret this decision down the road.

B&B fans know Thomas has been abusive to his son over the last few months, but this could serve as a wake-up call. He vowed to be the best dad he can be, so let’s hope he’s truly turning a corner. Of course, that doesn’t apply to Thomas’ treatment of everyone else. If you get on Thomas’ bad side, you’re going to be a target. That’s just the way it is!

The Bold and the Beautiful spoilers say Hope will rev up her manipulation on Halloween night. She’ll try to use Thomas’ love for her to her advantage. Hope will make Thomas believe there’s still a chance for them as a family – manipulating Thomas comes with big risks! Hope’s plan will wind up only make Thomas angrier if he sees it’s a scam. If he realizes Hope’s trying to scheme her way, or succeeded and did scheme her way to an adoption signature, Thomas will fly off the handle.

B&B buzz says this could kick off Thomas’ revenge on Hope. It seems he’s the only one who’s allowed to manipulate! Thomas doesn’t like getting played – or even someone attempting it. He’ll undoubtedly go after Hope even harder thanks to her efforts to gain custody, or joint custody, of Douglas. Thomas will surely want Hope miserable in her professional life as well as her personal one… or worse!

Unfortunately, Thomas has been known to go too far in his missions. Poor Emma Barber (Nia Sioux) is dead thanks in part to Thomas chasing after her. Could Hope land in a dangerous situation, too? Could that throw off Thomas’ plans? If Hope winds up in a hospital bed, that could pull Liam closer instead of driving him away. It could also jeopardize Thomas’ second chance and Ridge’s forgiving perspective.

The Bold and the Beautiful spoilers say Thomas’ vicious vengeance could begin soon, so don’t miss all the action. Will Hope’s scheme to get custody of Douglas have terrible consequences? Will this serve as another nightmare for Liam and others to deal with?