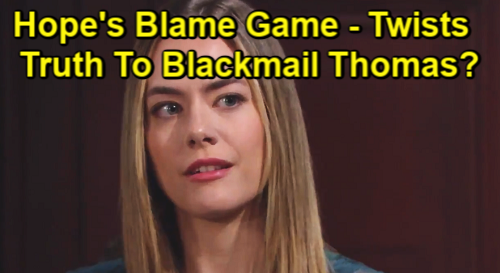 The Bold and the Beautiful (B&B) spoilers tease that Hope Logan’s (Annika Noelle) plot will bring serious trouble. She thought she could handle Thomas Forrester (Matthew Atkinson) and his obsession with her, but she thought wrong. Of course, we’re not giving Hope a pass here. She’s got an obsession of her own – and his name’s Douglas Forrester (Henry Joseph Samiri).

All that will collide into a gigantic mess during the week of November 4-8. Thomas’ romantic setup will lead to total mayhem at Forrester Creations. He might make a move that Hope views as frightening. As Thomas loses control again, Hope may fear he’ll try to sleep with her whether she consents or not.

Thomas could also insist on following through with his threat to leave town with Douglas. Hope would undoubtedly contend that it’d be cruel to the kid. Douglas already lost one mom, so Hope won’t want him to lose another and be at Thomas’ mercy. This argument will snowball into a massive confrontation, which could leave Hope terrified – both for herself and for Douglas.

It seems Douglas will be somewhere in the building as well. He’ll be on hand for the romantic setup, so it makes sense for him to still be around. Unfortunately, Thomas won’t be willing to tell Hope exactly where. Hope will race away from Thomas as she shouts Douglas’ name and wonders how Thomas could be so vicious. Hope will reiterate that Douglas is at risk, but she could play a role in the latest risk to Douglas.

The Bold and the Beautiful’s weekly promo shows Hope heading up a staircase. She might end up on the roof with Thomas or the staircase itself could be the problem. Could Douglas take a tumble? Could another character appear and get injured or killed? Whatever the case, the outcome will lead to a moral dilemma for Hope. She’ll wrestle with what she should do during the week of November 11-15.

Does that mean a B&B character will indeed face a disastrous outcome, but Thomas won’t be responsible? Let’s say someone slips and falls instead of being pushed. Thomas wouldn’t really be to blame for that, but Hope would have the opportunity to accuse him. Doing so might convince a judge that Thomas is dangerous. It could get Hope what she wants, which is to adopt and score full custody of Douglas.

Nevertheless, it would also be a lie – hence the moral dilemma. Hope could even blackmail Thomas by suggesting that if he doesn’t sign the adoption papers, then she’ll sell a bogus story to the cops. There are several potential angles for Hope to work, but her ultimate goal will be a safe home for Douglas.

No matter how this plays out, Hope will have some power in her hands. The Bold and the Beautiful spoilers say Hope will indeed become Douglas’ official mother, but she’ll battle guilt in the aftermath.

The sneakiness behind this adoption could come back to bite Hope in the end! We’ll give you updates as other B&B news comes in. Stick with the CBS soap and don’t forget to check CDL often for the latest Bold and the Beautiful spoilers, updates and news.