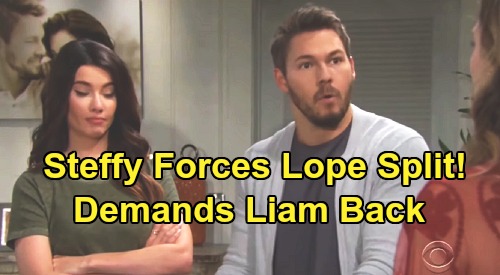 The Bold and the Beautiful (B&B) spoilers tease that Steffy Forrester (Jacqueline MacInnes Wood) will make up her mind. During the week of November 11-15, Steffy will want Liam Spencer (Scott Clifton) and Hope Logan (Annika Noelle) to break up. She’s already dropped hints about wanting Liam back, but she’ll soon admit she’s dating again, too.

However, Steffy’s insistence that Liam and Hope should split will serve as another step toward “Steam.” It stands to reason that Steffy will want to take Hope’s place. Even so, that may not be why she pushes for this breakup initially. Instead, it could be the result of the drama that erupts during the week of November 4-8.

The Bold and the Beautiful spoilers say Hope’s plan to manipulate Thomas Forrester (Matthew Atkinson) will go awry. She’s desperate to get those adoption papers signed and secure joint custody of Douglas Forrester (Henry Joseph Samiri). Hope would rather have full custody, but she feels she can still get that later. She’s just trying to make her move before it’s too late, but her pushiness will lead to danger.

Steffy Forrester May Lash At At Rival For Playing Her Brother

There’s still some B&B buzz about a major character possibly being killed off. Even if that doesn’t pan out, there’s a good chance someone’s going to end up injured.

That could play a role in Steffy’s desire to see a “Lope” breakup. It may be the last straw that tells her Liam has no business standing by Hope. She may lash out at her rival for playing Thomas before urging Liam to dump her.

Whatever the case, Steffy may ditch her new dating plan and focus on Liam. The Bold and the Beautiful always seems to nudge them back together.

Will Steffy Forrester Use A Tragedy To Provoke A Lope Split?

“Steam” may get a full-blown shove thanks to whatever blunder Hope makes. Steffy certainly won’t want to let Hope get away her botched scheming. It looks like Hope could be on the wrong side of a moral dilemma soon, so that’ll be more ammo.

Will Steffy be able to make lemonade out of lemons? Will she use this potential tragedy to spark a “Lope” split? The Bold and the Beautiful spoilers say Steffy will fight for love, so she’ll at least make every effort to cast Hope aside.