The Bold and the Beautiful Spoilers: Major Character Death Revisited – Thomas At Risk, Will Someone Else Die? 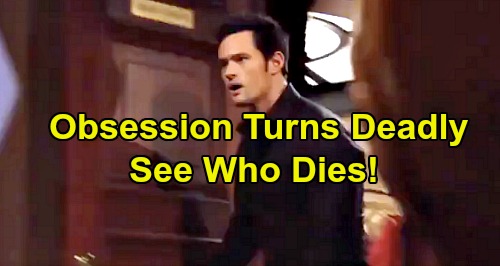 The Bold and the Beautiful (B&B) spoilers tease that viewers will be in for some intense and deadly scenes in the coming week, November 4-8. In Fact, this week’s preview promo is entitled ‘Obsession turns deadly.‘ As B&B viewers know, Hope Logan (Annika Noelle) is playing a dangerous game with Thomas Forrester (Matthew Atkinson). She wants Thomas to allow her to adopt Douglas Forrester (Henry Joseph Samiri) and she’s embarked on a risky mission to coerce him into signing adoption papers by pretending there may be a future for the two of them.

Of course, B&B viewers know that Hope has absolutely no intention of being with Thomas, so this plan could horribly backfire on her when Thomas realizes what she’s doing. Thomas is a master manipulator himself, and so Hope may be outmatched in the end. Thomas has already demanded that Hope prove her intentions by having sex with him, and Hope will only be able to put him off for so long before he realizes that she’s playing him.

According to The Bold and the Beautiful spoilers, there’s an explosive showdown coming between Hope and Thomas at Forrester Creations. It seems that Hope, Douglas, and Thomas will all be there together, and at some point, Hope will go frantically searching for Douglas, while yelling at Thomas that he’s a monster for what he’s done to his own son. There’s also B&B buzz that a major character death will occur on November 8, but this has yet to be confirmed – this sets up an interesting possibility.

It’s possible, but it’s also a possibility that a totally different character could die – for example, we could see Charlie Webber (Dick Christie) somehow try to intervene in the altercation between Thomas and Hope and get hurt in the process. It’s worth mentioning that longtime character Jake Maclaine (Todd McKee) will be back on the scene this week as well.

These characters are confirmed to appear in the episodes leading up to November 8 and also during the following week of November 11-15 so it’s not possible either are eligible to be the major character death.

Of course, another distinct possibility is that no one will die, but we should note that in an interview several months ago, Executive Producer Brad Bell indicated that there would be deaths (plural) associated with the baby swap storyline. And since the only character to die thus far in the baby swap storyline has been Emma Barber (Nia Sioux), it would seem that we’re due for another death soon.

Would TPTB actually consider killing off Thomas at this point, given that he’s such a central character? After all, he’s involved in the storyline involving Douglas’ custody as well as the storyline about the demise of Brooke Forrester (Katherine Kelly Lang) and Ridge Forrester’s (Thorsten Kaye) marriage.

And then there’s the burgeoning friendship (and possibly more) developing between Zoe Buckingham (Kiara Barnes) and Thomas. That’s just getting started, so it would seem weird for Thomas to just up and die at this juncture. At this point, we’ll have to wait and see how things unfold during the upcoming week and beyond.

Do you think we’ll see a B&B character die? Stay tuned to B&B and don’t forget to check CDL often for the latest Bold and the Beautiful spoilers, updates, and news.