The Bold and the Beautiful Spoilers: Preview Week of November 4 – Hope’s Staircase Scream, Frantic Over Douglas – Thomas Is a Monster

BY Heather Hughes on November 1, 2019 | Comments: one comment
Related : Soap Opera, Spoiler, Television, The Bold and the Beautiful 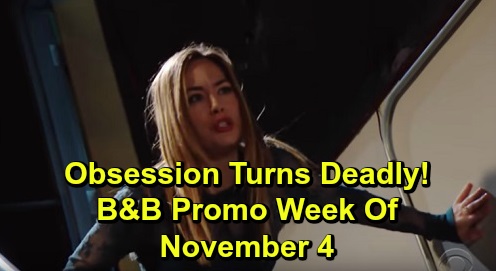 The Bold and the Beautiful (B&B) spoilers preview for the week of November 4-8 tease that Hope Logan’s (Annika Noelle) scheme will end in catastrophe. From the very beginning, this plan has seemed like a terrible idea. Thomas Forrester (Matthew Atkinson) has proven he’s capable of dark and dangerous things when he doesn’t get his way. His obsession with Hope tends to drive him down a horrific path.

Hope’s just begging for trouble by fueling that obsession, but she’ll let herself get in too deep. Although Hope will manage to dodge the indecent proposal Thomas just made, that won’t stop him from upping the ante. B&B fans will see a romantic setup for Hope at Forrester Creations. Thomas will work hard to make sure everything’s perfect – and Douglas will be on hand to help him seal the deal.

Thomas knows Douglas is his best tool to make Hope vulnerable. She’s using herself as bait essentially, but he’s got Douglas as his secret weapon. Before Hope walks into this trap, she’ll face a warning from worried Brooke Forrester (Katherine Kelly Lang). Brooke will feel like it’s time to cut off this plot. She won’t want Hope putting herself in any more danger than she already has.

However, Hope will insist on getting Douglas away from “that monster.” She’ll refuse to back down, so she’ll just up the ante right along with Thomas. The Bold and the Beautiful spoilers say Thomas will be crystal clear about what he wants. If Hope expects to share custody of his son, Thomas will maintain that he needs proof of a possible future together. Making love is the only proof Thomas will accept.

Hope will keep putting Thomas off, but the fact that he’s pushing so hard will only make her more concerned for Douglas. His father isn’t a stable man! After Hope finds that romantic setup we mentioned, the situation will spiral out of control.

The Bold and the Beautiful’s weekly preview shows Hope running as Thomas chases after her. Hope calls out for Douglas and ends up frantic on a staircase. She screams, “Who are you and how can you be so cruel to your son?” The promo also insists that an “obsession turns deadly,” so the action’s really heating up!

There’s been some buzz about a major character possibly being killed off. Whether that pans out or not, danger’s definitely set to explode. We’ll give you updates as other B&B news comes in. Stay tuned to the CBS soap and don’t forget to check CDL often for the latest Bold and the Beautiful spoilers, updates and news.