BY Heather Hughes on April 19, 2019 | Comments: one comment
Related : Soap Opera, Spoiler, Television, The Bold and the Beautiful 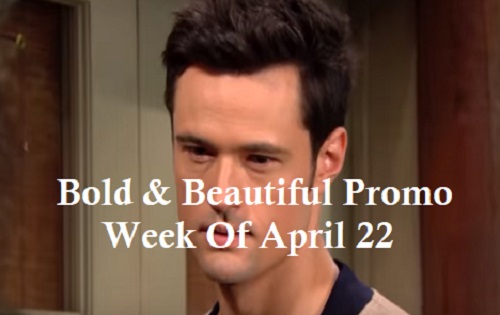 The Bold and the Beautiful (B&B) spoilers for the week of April 22-26 tease that we’ll see some sneaky plans and big missions. For starters, let’s talk about Thomas Forrester’s (Matthew Atkinson) new plot. He’ll talk to Sally Spectra (Courtney Hope) about his growing desire to reunite with Hope Spencer (Annika Noelle), which will leave her taken aback and deeply concerned.

Sally knows Liam Spencer (Scott Clifton) is committed to fulfilling Hope’s needs and repairing their marriage. She won’t think Thomas should get in their way, especially since they’re both still trying to heal after Beth Spencer’s “death.” Sally will feel like Thomas should do the right thing and just leave “Lope” alone.

Thomas can understand what grief does to a person since he lost Caroline Spencer (Linsey Godfrey) not too long ago. They’re weren’t an item anymore, but Caroline was Douglas Forrester’s (Henry Joseph Samiri) mother and meant a great deal to them both. However, Thomas is the kind of guy who goes after what he wants. He’ll insist the time to strike is now, so this sabotage scheme will move forward.

Thomas will position himself in Hope’s orbit at work and manipulate her with a drawing he claims is from Douglas. It’ll actually be Thomas’ sketch, but he’ll pretend it’s from his son to tug at Hope’s heartstrings. The Bold and the Beautiful spoilers say Thomas will do just about anything to win Hope over.

In fact, Thomas will rope Amelia (Nicola Posener) into this all the way from Paris. B&B fans know Amelia is a nanny to Kelly Spencer (Zoe Pennington and Chloe Teperman) and “Phoebe Forrester” (Isabella de Armas and Redford Prindiville). Since she has a brief history with Thomas, Amelia will agree to help him out. Thomas will talk Amelia into filming Kelly as she walks around asking for her daddy.

After Hope sees what seems to be a heartbreaking video, she’ll insist that Liam must go to Paris. Even Liam himself will agree once he learns his daughter’s missing him so much. Thomas will score some alone time with Hope, so he’ll try to make it work to his advantage.

Other Bold and the Beautiful spoilers say Quinn Forrester (Rena Sofer) will spot an innocent hug between Thomas and Sally. Of course, she’ll attempt to turn into something scandalous. Quinn will blab to Wyatt Spencer (Darin Brooks) and argue that he needs to dump Sally ASAP. She’ll want him back with Florence “Flo” Fulton (Katrina Bowden), but Wyatt will drag his feet on that reunion for now.

Later, Quinn will work another angle by approaching Sally at home. She’ll have a trip in mind for Sally – a one-way ticket out of Wyatt’s life! The Bold and the Beautiful spoilers say Sally won’t give Wyatt up without a fight, so stay tuned for more drama.

Are you looking forward to all the great action this week? We’ll give you updates as other B&B news comes in. Stick with the CBS soap and don’t forget to check CDL often for the latest Bold and the Beautiful spoilers, updates, and news.