The Bold and the Beautiful Spoilers: Monday, April 22 – Thomas Schemes To Win Over Hope – Liam Struggles To Save Lope Intimacy

BY hellodrdavis on April 19, 2019 | Comments: one comment
Related : Soap Opera, Spoiler, Television, The Bold and the Beautiful 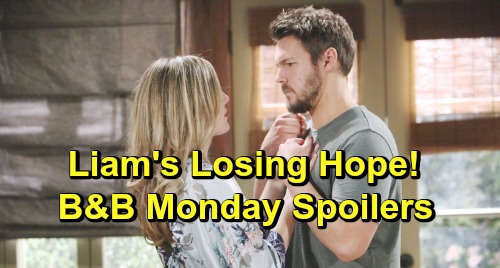 The Bold and the Beautiful spoilers for Monday, April 22, tease that Thomas Forrester (Matthew Atkinson) will move forward with his plans to win over Hope Spencer (Annika Noelle). Thomas has just learned about some of the problems between Hope and Liam Spencer (Scott Clifton). Hope innocently mentioned that she tried to give Liam her wedding ring back, and you could practically see the wheels turning in Thomas’ head.

Thomas also recently admitted to Ridge Forrester (Thorsten Kaye) that he doesn’t think he ever got over his feelings for Hope from years ago. And according to B&B spoilers, Thomas will proceed ahead with an ulterior motive: to get Hope for himself and Douglas Forrester (Henry Joseph Samiri). Thomas would like nothing more than for Hope to be a permanent mother figure in Douglas’ life.

The Bold and the Beautiful spoilers say that Thomas will continue to pursue a designer position on the Hope For The Future (HFTF). He’ll want to arrange things so that he spends as much time as possible with Hope, and taking Thorne Forrester’s (Ingo Rademacher) place on the HFTF designing team is certainly one way to make that happen.

Other B&B spoilers say that Thomas will work to manipulate Hope’s emotions in the future. It looks like Thomas will do his best to get Hope to send Liam off to Paris to visit Steffy Forrester (Jacqueline MacInnes Wood) and the girls.

He’ll even arrange for Hope to videoconference with Steffy, Phoebe Forrester (Isabella de Armas and Redford Prindiville) and Kelly Spencer (Chloe Teperman and Zoe Pennington), to convince Hope just how much Kelly and Phoebe need Liam.

It will all be very calculated on Thomas’ part. We’ll see just how successful his plans eventually are, but for now he’ll start to put his scheme into motion. He’ll be preying on an unsuspecting and completely trusting Hope.

Meanwhile, on the new episode of B&B on Monday, April 22, Liam will decide to make a move to help nurture his marriage to Hope. Liam has just used Wyatt Spencer (Darin Brooks) and Sally Spectra (Courtney Hope) as a sounding board for some of his concerns about his marriage. And although they encouraged Liam to head to Paris to visit Steffy, Kelly, and Phoebe, Liam will decide to take another approach.

Hope and Liam really need to move forward together as a couple. Intimacy has been lacking in their marriage ever since their daughter’s death, and they really need to reconnect and enjoy a close relationship again. Liam will go the “no pressure” route by planning a romantic dinner, just to gently start the process going.

We’ll see how receptive Hope is to the whole scene. According to B&B spoilers, she’ll truly appreciate all of Liam’s efforts and won’t want to disappoint him, but the tragedy surrounding their daughter probably won’t be far from her mind.