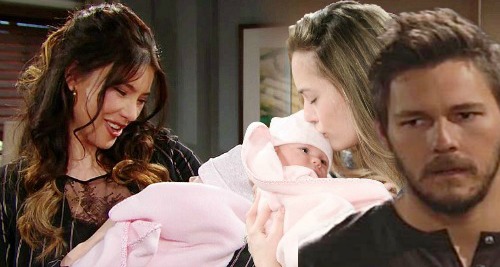 The Bold and the Beautiful spoilers tease that Steffy Forrester’s (Jacqueline MacInnes Wood) European trip will soon end. She and her daughters will return to Los Angeles, California. When they do, the most amazing tale will soon be known. Phoebe Forrester is actually Beth Spencer (Isabella de Armas and Redford Prindiville). And with that, chaos will erupt on B&B.

The idea that Reese Buckingham (Wayne Brady) is still a doctor is scary. Who knows what the still-addicted gambler is doing in London, England, in response to whatever trouble he may have gotten himself into after leaving the United States.

Zoe Buckingham (Kiara Barnes) told Xander Avant (Adain Bradley) that she needed to leave town to talk to her dad. Her restored boyfriend didn’t understand why Zoe simply couldn’t call Reese. But devoted viewers knew that the show was likely signaling the coming climax to the incredible baby sale story that’s been told. Brady will need to reprise his role once this storyline’s end arrives.

Steffy doesn’t know that her mother’s generosity, in giving Reese a quarter of a million dollars for the so-called adoption, was a mega-mistake. Taylor Hayes (Hunter Tylo) furthered a crime that was committed in doing so. Whether Taylor’s medical license will be impacted is unknown, but Dr. Buckingham’s will certainly be frozen, or revoked once the reveal happens.

Hope Spencer (Annika Noelle) and Liam Spencer (Scott Clifton) were rightfully devastated when Reese told them that their baby, Beth, had died. They had no idea that she was completely healthy, or that another poor soul’s baby, had actually died at the clinic in Catalina, California, was given to them as their own.

The distress Hope and Liam has since faced is a moral crime, in and of itself. But what Reese did and what Flo Fulton-Logan (Katrina Bowden) wrongfully aided, also broke the law. And for that both characters will need to face some form of justice.

As the truth about Beth-Phoebe leaks, as is the method in daytime, the enormous impact of the truth will be primed. Steffy will be forced to give her presumed adopted daughter to Hope and Liam. They will be staggered by the revelation, while also offering compassion to Steffy.

Brooke Logan-Forrester (Katherine Kelly Lang), who defends her own as fiercely as anyone will, of course, pounce on Taylor’s purchase of Beth, or at least that’s how the adoption can be portrayed. Meanwhile, Brooke’s husband, Ridge Forrester (Thorsten Kaye), will be once again caught between his daughter, Steffy, and his wife.

Hope and Liam were overjoyed at the thought of being parents. Then, they were told their dream had died. Now that Beth will be resurrected, all B&B fans can surely wonder, where this California roller coaster ride will go next?