The Bold and the Beautiful Spoilers: Is Beth Better Off with Liam & Steffy or Hope & Thomas – Custody Battle Brewing?

BY Heather Hughes on November 29, 2019 | Comments: one comment
Related : Soap Opera, Spoiler, Television, The Bold and the Beautiful 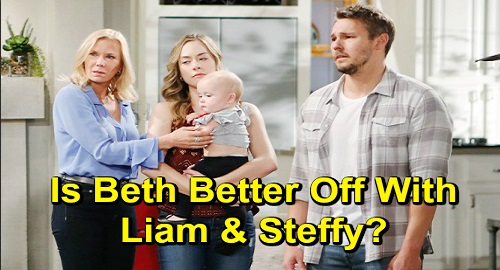 The Bold and the Beautiful (B&B) spoilers tease that some romantic shakeups may be looming on the CBS soap. B&B fans know Liam Spencer (Scott Clifton) has a special connection with his ex, Steffy Forrester (Jacqueline MacInnes Wood). They’ve had several warm moments during all the family bonding they’ve been doing lately. The show wants us to see all the love left in their hearts.

We’ve seen Liam waffle enough times to know when he’s about to do it again! It seems safe to predict that a “Steam” reunion is most likely in the works. Since The Bold and the Beautiful is a soap driven by love and conflict, they don’t like to leave the main characters single for long. Hope Logan (Annika Noelle) will undoubtedly find someone else to love if Liam reunites with Steffy – and Thomas Forrester (Matthew Atkinson) is the most logical option.

Noelle has great chemistry with Atkinson, and they seem to enjoy working together based on all their interviews. Wyatt Spencer’s (Darin Brooks) already got Florence “Flo” Fulton (Katrina Bowden) and Sally Spectra (Courtney Hope) in his orbit, so there’s no need to add Hope, too. With all that in mind, there’s a good chance they’ll dial down Thomas’ crazy side and allow him to genuinely win Hope over.

Since “Steam” and “Thope” appear to be what the show’s building toward, we should think about the kids involved here. Thomas and Hope are Douglas Forrester’s (Henry Joseph Samiri) legal parents, so custody drama seems less likely with him. Unless something major were to happen, there’s no reason why Douglas would end up with anybody but Hope and Thomas. The same goes for Kelly Spencer (Zoe Pennington) remaining perfectly happy with Steffy and Liam.

What about Beth Spencer (River Davidson and Madeline Valdez) though? This could get tricky since Beth is the biological daughter of Beth and Liam. People co-parent successfully all the time, but soaps are known for custody battles – particularly if breakups get nasty and stepparents are questionable.

Would Beth be better off being primarily raised by Liam and Steffy as a couple or Hope and Thomas? It’s easy to see it coming down to that, at least for a while. Liam might be appalled that Hope’s willing to give Thomas a real chance after the instability he’s shown. He may argue that Thomas shouldn’t be around his little girl. Liam may think Beth isn’t safe with Thomas and put his foot down.

To be fair, Thomas’ behavior has definitely been out of control at times. Liam might have a strong case in court. Steffy would certainly be more than happy to pick up Mommy duty again. However, Hope is Beth’s bio mom and already missed so much of her early life. If Thomas can truly settle down and be a family man, perhaps Beth would be better off remaining mostly with Hope and her potential stepdad.

Still, there’s always going to be a crazy cloud that hangs over Thomas. Liam will have to wonder if Thomas will slip back into old patterns and put his kid at risk. There’s also the issue of Hope feeling threatened by Steffy, who served as Beth’s first mom. That’s bound to cause co-parenting challenges, so a “Steam” vs. “Thope” war could indeed be brewing.

The Bold and the Beautiful spoilers say the current storyline could lead to several more, so don’t miss all the action. Do you think Beth would be better of with Liam and Steffy or Hope and Thomas? If a custody battle plays out, which couple should raise her? We’ll give you updates as other B&B news comes in. Stay tuned to the CBS soap and don’t forget to check CDL often for the latest Bold and the Beautiful spoilers, updates and news.