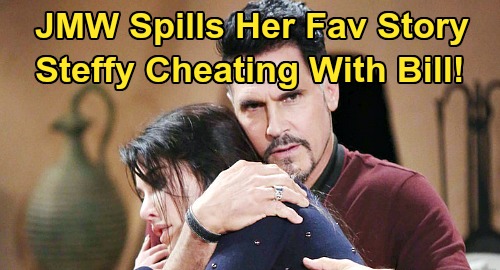 The Bold and the Beautiful (B&B) spoilers reveal that Jacqueline MacInnes Wood (Steffy Forrester) recently reflected on her time at the CBS soap. Wood hopefully has many more years to go, but it’s always fun to look back at memorable moments. She talked about her favorite storylines and costars in a new interview with Soap Opera Digest, so let’s dive in and see what she had to say.

As for Wood’s fave storyline, her answer might surprise you. Wood confessed that she liked 2017’s storyline with Liam Spencer (Scott Clifton) and Bill Spencer (Don Diamont) the best. Of course, that was the one that involved Steffy cheating with Bill and led to paternity questions. Wood suggested that she loved it since it was so emotional and challenging, but she also hated it because she had to cry so much!

Since weddings are such a huge part of The Bold and the Beautiful, Wood talked about her favorite of Steffy’s. She gave her top pick to the one that was filmed in Australia. It was tough to beat shooting in front of the Sydney Opera House.

Next, Wood had some kind words for several costars. She mentioned how it was a blast to work with Scott Clifton since they share so many inside jokes. Wood noted that it lightens things up whenever the material gets too heavy.

Speaking of heavy material, Wood was impressed with Matthew Atkinson and his debut as a Thomas Forrester recast. Atkinson had to play the aftermath of Caroline Spencer’s (Linsey Godfrey) death right off the bat, and Wood thought he did a fantastic job. She also pointed out that they truly have a sibling-like vibe. Wood even pokes Atkinson in between their scenes together!

As for Annika Noelle (Hope Logan), any drama that happens is strictly on the show. Wood insisted she’s proud of Noelle for making the role of Hope her own and loves watching her perform. “I’d be surprised if she wasn’t nominated [for a Daytime Emmy] and she’ll probably win because her work has been phenomenal this year,” Wood said.

Wood also appreciates the fact that Steffy’s found a gal pal in Sally Spectra (Courtney Hope). She said, “These days, it’s nice for Steffy to have a girlfriend, someone to lean on…” Wood feels like their real-life friendship shines through when they’re onscreen together.

Finally, Wood acknowledged that they’re a big family at B&B. She assured everyone that there are no divas in the building! Wood adores working there and likes the great energy they keep up.