BY Heather Hughes on December 28, 2019 | Comments: one comment
Related : Soap Opera, Spoiler, Television, The Bold and the Beautiful 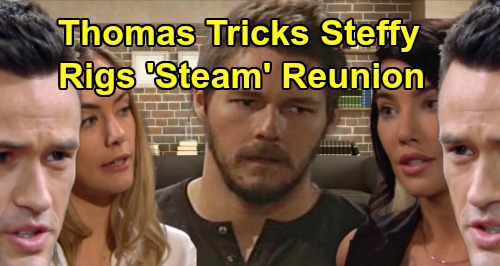 The Bold and the Beautiful (B&B) spoilers tease that Thomas Forrester (Matthew Atkinson) will decide to take a new approach. Of course, he’ll keep up his old one – at least for a while. Thomas will keep pulling Zoe Buckingham (Kiara Barnes) closer and will even make love to her in the week ahead. He’ll feel confident that moving his romance along with Zoe will help him win over Hope Logan (Annika Noelle).

B&B fans can expect changes in the new year, but Thomas will remain obsessed with Hope for now. Even if Thomas were to make Hope jealous through Zoe, there’s still the matter of Hope’s relationship with Liam Spencer (Scott Clifton). Thomas will eventually realize he’s got more obstacles to clear, but he’ll know there’s a secret weapon in his arsenal.

Liam isn’t exactly known for being a one-woman man. He’s earned his reputation as The Bold and the Beautiful’s resident waffler, so Thomas will try to use that to his advantage. Naturally, Steffy Forrester (Jacqueline MacInnes Wood) will be part of this plot. Thomas has already expressed his vision for the future, which involves him getting back together with Hope while Steffy reunites with Liam.

However, Thomas will know he needs to act fast after a handsome man a Forrester Creations asks Steffy out. He’ll probably worry that Steffy will fall for someone else and throw off his plans, so he’ll kick a new scheme into high gear. The Bold and the Beautiful spoilers say Thomas will do what he does best and manipulate! This time it’ll be Steffy who’s bamboozled by her brother’s antics.

Steffy will be tricked into making some sort of move on Liam – one that will apparently be viewed as an expression of what she really wants. To be fair, Steffy does seem to want her life with Liam back. She’d love the chance to raise Kelly Spencer (Zoe Pennington) together and have Liam by her side once again. There’s always going to be a strong connection for “Steam,” so Thomas will prey on that.

Will Thomas make sure Hope sees Steffy make her move? That’s one option to consider. It’s also possible Thomas will try to be patient and let Liam waffle a bit first. It might be better to wait until something actually happens before Thomas brings Hope into this.

Either way, Thomas will hope to reignite Liam and Steffy’s spark during the week of January 6-10. The Bold and the Beautiful spoilers say Liam’s sure to be caught off guard by Steffy’s actions, so stay tuned. We’ll give you updates as other B&B news comes in. Stick with the CBS soap and don’t forget to check CDL often for the latest Bold and the Beautiful spoilers, updates and news.