BY Heather Hughes on August 19, 2019 | Comments: one comment
Related : Soap Opera, Spoiler, Television, The Bold and the Beautiful 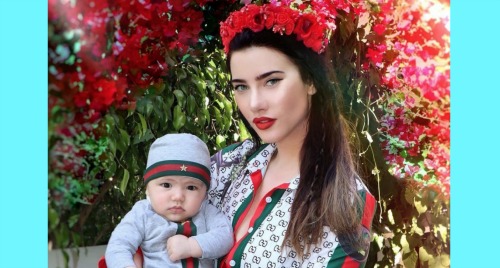 The Bold and the Beautiful (B&B) spoilers reveal that one CBS soap star is embracing life as a mom both on and off set. B&B fans know Jacqueline MacInnes Wood as Steffy Forrester, who was forced to give up her illegally adopted daughter in some heartbreaking scenes. Steffy is still a mom to Kelly Spencer (Zoe Pennington), but losing “Phoebe Forrester” aka Beth Spencer (River Davidson and Madeline Valdez) was brutal.

Of course, Wood is a new mom to her son, Rise, who was born back in March. The Daytime-Emmy winning actress spoke to Soap Opera Digest about her pregnancy, motherhood and the crazy ride she’s been on. Wood admitted that working with the little ones on set was a great learning tool. It was like B&B baby boot camp! “I wasn’t really around babies, so I got to learn through them,” Wood said.

Wood also addressed that buzzed about pregnancy announcement she made. The Bold and the Beautiful was doing a runway walk for Steffy, so Wood decided the jig was up. She knew she wouldn’t be able to hide her baby bump much longer, but she didn’t want to shut down the fashion show fun either. Wood embraced the chance to turn into a fun announcement, which thrilled the cast and crew.

“There were rumors and people wondering anyway, so I might as well announce it in a wild way,” Wood said. “I mean, that’s really not surprising for me.” What was a surprise was how long it took for Rise to arrive! Wood suggested her pregnancy was an easy one, but Rise caused a delay before his delivery. He came almost three weeks late, so Wood had to resort to tricks like dancing and eating spicy food to move things along.

Once Rise was born, Wood confessed she had a moment of panic, but she quickly settled into the role of Mom. She called herself “a work in progress,” but she continues to discover tips on the job thanks to the B&B kiddos. “Now, as those babies get older, I’m still learning and preparing for the future,” Wood said. “I’m learning through the kids on my set!”