The Bold and the Beautiful Spoilers: Katie Rejects Bill – Turns To Shauna For Comfort, Katie Stunned and Jealous

BY hellodrdavis on April 20, 2019 | Comments: one comment
Related : Soap Opera, Spoiler, Television, The Bold and the Beautiful 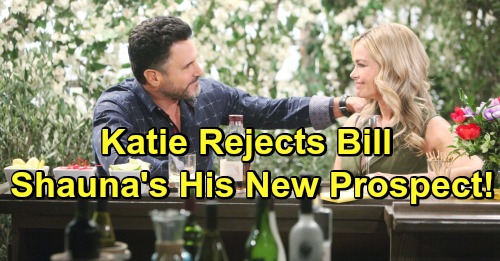 The Bold and the Beautiful spoilers tease that Bill Spencer (Don Diamont) will face some bad news. He’s been getting closer to his ex-wife Katie Logan (Heather Tom) lately, and it’s been great for them both. They’ve really reconnected since Bill decided to change his ways for the better. And when Caroline Spencer (Linsey Godfrey) died, Katie was there to help Bill through his grief.

Of course, Will Spencer (Finnegan George) has been a big part of Bill and Katie’s recent closeness. Will turned out to be the “cupid” who arranged several meetings and dinners between his parents. He’d like nothing more than to see his parents happy and in love again, and he’s made this well-known to Bill and Katie.

Well, it looks like all of this will get Bill thinking, and according to B&B spoilers, he’ll decide to approach Katie with a request. He’ll work up his nerve and ask Katie if she’s interested in giving their relationship another chance. He’ll probably kindly remind her about how much he’s changed and how he’s willing to put her and Will first always.

But B&B spoilers say that Bill will get a crushing blow. Katie will flatly refuse to even try to get back together. She might argue that they’ve already been down that road more than once, and it didn’t work out. She might also cite Will’s well-being. After all, Will is happier now than he ever has been, and she’d hate to see him hurt if their reunion didn’t work out.

So, it looks like Bill will get rejected, but he’ll decide to go on with life and just be the best dad he can be to Will, even though he and Katie won’t be together as a couple. But interestingly, shortly after Katie rejects Bill, something will happen that will stir up some feelings in Katie…feelings that just might change her mind about reuniting with Bill.

According to B&B spoilers, Bill will find himself at Il Giardino for a meal, when he spots Shauna Fulton (Denise Richards) dining alone. The two will chat, and it looks like they’ll end up dining together. There may be some awkward moments between them, given their past, but it looks like they’ll move past it and enjoy their meal together.

As they are dining, Katie will come along and notice them together, and she’ll be startled. Of course, she knows Shauna as Florence “Flo” Fulton’s (Katrina Bowden) mom, and she won’t immediately understand the connection between Shauna and Bill. But most importantly, it seems that Katie will feel jealousy as she watches Shauna and Bill together.

It will be interesting to see what Katie does after spotting Shauna with Bill. Her jealousy may get the best of her, and she may question Bill about his relationship with Shauna – something that may amuse Bill and signify that Katie may indeed feel more toward Bill than she’s letting on.

Do you think we’ll see Katie and Bill get back together after all with jealousy over Shauna the catalyst? Stay tuned to the CBS soap and don’t forget to check CDL often for the latest Bold and the Beautiful spoilers, updates, and news.