BY Heather Hughes on April 20, 2019 | Comments: one comment
Related : Soap Opera, Spoiler, Television, The Bold and the Beautiful 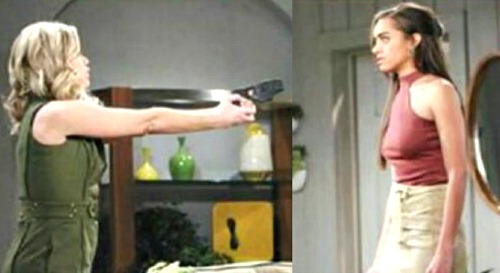 The Bold and the Beautiful (B&B) spoilers tease that Brooke Forrester (Katherine Kelly Lang) will casually bring up what she believes is good news. She’ll mention something she thinks might interest Zoe Buckingham (Kiara Barnes) during a brief chat at work. Brooke will point out that the birth mom of Steffy Forrester’s (Jacqueline MacInnes Wood) adopted baby recently found out she’s a Logan.

Naturally, Zoe will hit the panic button. She’ll struggle to remain calm as she grills Brooke and gets confirmation that Storm Logan (William deVry) was indeed Florence “Flo” Fulton’s (Katrina Bowden) father. Zoe was already uneasy about Flo staying in town and spending too much time with Hope Spencer (Annika Noelle). You can imagine how upset she’ll be when she learns Flo is Hope’s cousin!

The Bold and the Beautiful spoilers say Zoe will excuse herself and head straight for Flo’s apartment. She’ll want to address this growing mess with Flo and try to figure out a way to handle it. Unfortunately, Zoe won’t agree with Flo’s choice. Despite Shauna Fulton’s (Denise Richards) suggestion that Flo should stay quiet, Flo just won’t think she can do that. She’ll let Zoe know that she has to come clean.

Of course, Zoe will worry about all parties involved going to prison. She’s known about this for a while now, so she could be implicated. However, Zoe will obviously be most worried about her father. She won’t want to see Dr. Reese Buckingham (Wayne Brady) land behind bars. The Bold and the Beautiful spoilers say Flo will insist on making a confession anyway, so Zoe will decide to intervene.

B&B viewers can expect a physical confrontation between these two. Zoe will literally wrestle with Flo as she tries to stop her. She’ll eventually knock Flo to the ground and show off a little of that crazy side we once saw. Zoe has always had the ability to come unhinged waiting just under the surface.

Next, Shauna will arrive and show she can be just as nuts! She won’t be happy about Zoe’s attack, so she’ll hold her at gunpoint and fear for injured Flo on the floor. It’ll be a major crisis, but it should be awfully entertaining for Bold and the Beautiful fans.

Are you looking forward to all the action this week? We’ll give you updates as other B&B details emerge. Stay tuned to the CBS soap and don’t forget to check CDL often for the latest Bold and the Beautiful spoilers, updates, and news.