BY Heather Hughes on September 15, 2019 | Comments: one comment
Related : Comings & Goings, Soap Opera, Spoiler, Television, The Bold and the Beautiful 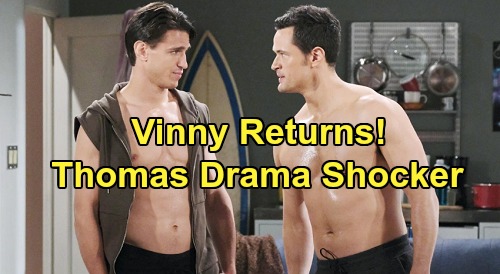 The Bold and the Beautiful (B&B) spoilers reveal that we’ve got some comings and goings news to pass along. First, let’s talk medical drama! Katie Logan (Heather Tom) will definitely need some help after her stunning collapse. Thankfully, she’ll have a top-notch team on her side.

Dr. Jordan Armstrong (Vincent Irizarry) will make more appearances during the week of September 23-27. However, he won’t be the only doctor on hand in the coming weeks. Tisha Campbell is set to play Dr. Davis starting October 4. Could that mean Katie will need a specialist? Dr. Davis might be called in as backup following what looks like some heart complications for Katie.

Of course, The Bold and the Beautiful fans will see Will Spencer (Finnegan George) as this family crisis plays out. Bill Spencer (Don Diamont) will do his best to be there for his son, but he’ll be worried, too. It hasn’t been that long since Katie and Bill reunited. Bill just got Katie back, so he’ll fear he’s going to lose her – perhaps for good this time.

Fortunately, soap miracles are the norm. Katie seems poised to get one and will likely sit around the Thanksgiving table as usual this year. In the meantime, there’ll be some interesting developments at Forrester Creations. As the company tackles some crucial lines and prepares for a fashion show, they’ll need models for their latest designs.

Kyra Green, a reality TV star from season one of Love Island, will serve as one of those models. You can look for her character to appear on September 20 and September 23. Over with Thomas Forrester (Matthew Atkinson), it looks like he’ll reconnect with a friend. Vincent “Vinny” Walker (Joe LoCicero) just might be the only pal Thomas has left, so Thomas should appreciate having Vinny to lean on.

The Bold and the Beautiful spoilers say Vinny will pop up again on September 27 and September 30. Sadly, trouble can sometimes follow Vinny. Could Thomas have another sneaky plan in mind?

Will he need to score more drugs? Could Vinny just innocently chat with Thomas instead? It’s possible B&B will just give Thomas a sounding board, but we certainly can’t rule out another round of chaos.

That’s it for comings and goings! We’ll give you updates as other B&B details emerge. Stay tuned to the CBS soap and don’t forget to check CDL often for the latest Bold and the Beautiful spoilers, updates and news.