The Bold and the Beautiful Spoilers: Steffy’s Next Man – Good Match Already On The B&B Canvas or New Character? 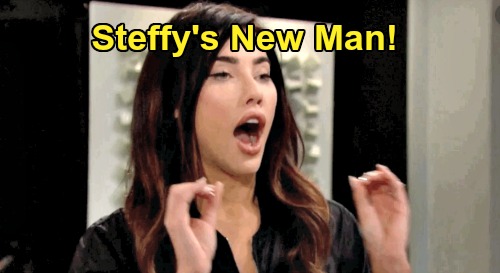 The Bold and the Beautiful (B&B) spoilers tease that Steffy Forrester (Jacqueline MacInnes Wood) will need a new love interest eventually. For some reason, B&B never seems very invested in bringing a new hunk on to be paired with Steffy – or anyone else for that matter. The show could really use a hot guy with no familial ties to anyone on canvas. It’d make things less complicated and less icky in some cases.

After all, it was pretty strange when stepsiblings Thomas Forrester (Matthew Atkinson) and Hope Logan (Annika Noelle) got married. R.J. Forrester’s (Anthony Turpel) brother married his sister, and that’s just plain weird. All these families are too closely connected at this point, so it wouldn’t hurt to have some fresh blood around town. It would shake up The Bold and the Beautiful spoilers for sure!

However, we have to consider the possibility that B&B will do what they usually do and work with what they have. Could there still be a match for Steffy on the current canvas? The consensus on social media seems to be that Steffy’s too good for Liam Spencer (Scott Clifton). Whether you fall into that camp or not, it’s tough to deny Liam’s waffling has gotten out of control over the years.

Of course, some people think the “Steam” magic can’t be beat. Perhaps Liam could still be Steffy’s perfect man down the road. There are certainly other options to consider though. One is Carter Walton (Lawrence Saint-Victor). Saint-Victor has always been vocal about wanting Carter and Steffy to be an item. There’s no reason why The Bold and the Beautiful couldn’t give it a shot.

It seems the door has closed on a Bill Spencer (Don Diamont) and Steffy pairing, but there are definitely some devoted “Still” shippers out there. It’s tough to imagine them becoming some grand love story though. B&B could always rewrite Kelly Spencer’s (Zoe Pennington) paternity if they wanted to bring Steffy and Bill together, but many Steffy fans probably wouldn’t approve.

As for Steffy and Wyatt Spencer (Darin Brooks), most people seem to think they work best as friends. Wyatt’s become a bit of a waffler like his brother anyway, so he may not be much better than Liam at this point. Nevertheless, some viewers liked “Statt’s” chemistry and would like it revisited.

A few fans out there have even suggested Vincent “Vinnie” Walker (Joe LoCicero) as an option. He’s good-looking, but he dabbles in drugs and doesn’t really seem like Steffy’s type. Even so, B&B could always have Vinnie turn things around. Perhaps seeing how far Thomas fell could inspire Vinnie to make something of his life.

None of these possibilities are ideal since someone brand-new is really needed, but is there one you could live with? If you were going to pair Steffy up with someone on canvas, who would you choose? We’ll give you updates as other B&B news comes in. Stay tuned to the CBS soap and don’t forget to check CDL often for the latest Bold and the Beautiful spoilers, updates and news.