The Bold and the Beautiful Spoilers: Week of July 29 Preview – Liam Tells Steffy ‘That Is MY Baby!’ – Thomas Threatens Hope

BY Heather Hughes on July 27, 2019 | Comments: one comment
Related : Soap Opera, Spoiler, Television, The Bold and the Beautiful 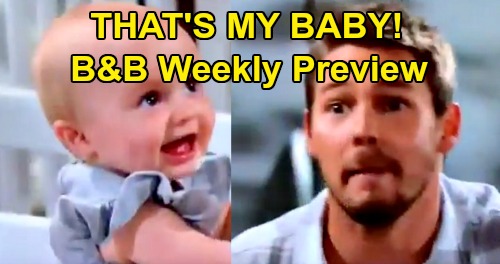 The Bold and the Beautiful (B&B) spoilers preview for the week of July 29 to August 2 tease that more Beth Spencer bombs are about to drop. Douglas Forrester (Henry Joseph Samiri) already dropped a big one when he told Hope Forrester (Annika Noelle) the truth: Baby Beth is alive! Unfortunately, Hope will misinterpret the situation and certainly won’t believe the dead daughter she cradled could’ve survived.

An angry Thomas Forrester (Matthew Atkinson) will take his son aside and insist Douglas had better not breathe one word about what he heard. Thomas will undoubtedly worry about Douglas getting stuck on this idea and explaining it to Steffy Forrester (Jacqueline MacInnes Wood).

However, it’s Liam Spencer (Scott Clifton) who will pose the biggest threat. On the B&B preview promo video He’ll watch and observe Thomas’ warning to Douglas, so he’ll know he needs to crack this case ASAP. The Bold and the Beautiful spoilers say Liam will put his IT hat on and snoop for additional clues. He’ll be convinced there’s proof of the truth if he just looks hard enough.

Meanwhile, B&B fans can expect things to get heated between Thomas and Hope. On their honeymoon, Thomas will want their evening to take a sexy turn. Hope, on the other hand, will just want to talk about how much she loves Douglas. It’ll get Thomas riled and set the stage for even more drama.

Later, Hope will also mention Beth and perhaps remind Thomas that she’s just not interested in sex. She hates the thought of getting pregnant again and even had a hard time taking that step with Liam after Beth’s “death.” Thomas’s rage will finally erupt, which will catch Hope off guard and leave her on edge.

“Beth is gone. Your daughter is never coming back,” Thomas snarls in B&B’s weekly preview promo. Hope looks stunned by the insensitive comment and Thomas’ dark expression. Another part of the preview video features Liam clutching Steffy Forrester (Jacqueline MacInnes Wood) by the arms gently as he declares Beth is NOT dead. It looks like Steffy’s reluctant to believe it as Liam shouts, “That is MY baby!”

The Bold and the Beautiful spoilers say Liam will come to Hope’s rescue after hearing Florence “Flo” Fulton’s (Katrina Bowden) full confession. He’ll save Hope from crazy Thomas, and “Lope” will enjoy a little family time with Beth. Afterward, Steffy will get the terrible news that “Phoebe Forrester” (River Davidson) is actually Beth – which means she’ll have to give her up.

Of course, there could be some custody issues that come into play. It’ll be interesting to see how brutal the fallout is. We’ll give you updates as other B&B details emerge. Stay tuned to the CBS soap and don’t forget to check CDL often for the latest Bold and the Beautiful spoilers, updates and news.