The Bold and the Beautiful Spoilers: Wyatt and Liam’s Fury Erupts as Flo Confesses Baby Beth Story, Pleads for Mercy 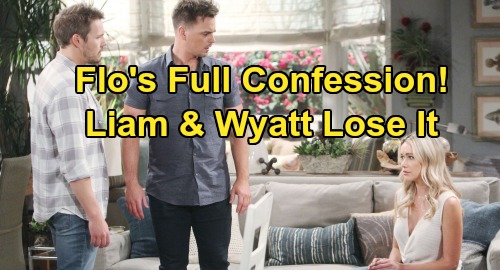 The Bold and the Beautiful (B&B) spoilers tease that Florence “Flo” Fulton (Katrina Bowden) will be backed into a corner. After Liam Spencer (Scott Clifton) angrily demands answers, Flo will decide she can’t lie her way out of trouble anymore. She’ll determine it’s time to tell the truth about Beth Spencer and let the chips fall where they may.

Flo can’t handle all this guilt, and Liam will know too much anyway. There’ll be no escaping the fallout any longer. B&B spoilers say Flo will come clean, which will bring pure rage from Liam.

He’ll blast Flo for standing by and doing nothing while her own cousin fell apart. Hope Forrester’s (Annika Noelle) been a mess thanks to her horrible grief over losing her daughter.

Liam will hate what this is going to do to Steffy Forrester (Jacqueline MacInnes Wood), too. He’ll hear the whole terrible story and pretty much loathe Flo with every fiber of his being.

Wyatt Spencer (Darin Brooks), on the other hand, will still be in a state of shock. He’ll undoubtedly move to anger sooner or later, but he’ll truly want to understand the situation first.

Flo will scramble to explain her actions and assure Wyatt she doesn’t like who she’s turned into. She’ll hate that she let this chaos get so out of hand. Flo will definitely let Wyatt know that the guilt’s been eating away at her. However, Flo’s actions are what really matters here. She can feel guilty about what she’s done, but that doesn’t change the fact that she did it.

Flo Fulton Will Fight Desperately To Hang On To Wyatt Spencer

The Bold and the Beautiful spoilers say Flo will fight desperately for her relationship. She’ll fear she’s screwed up her second chance with Wyatt, but she’ll hope for mercy. Flo will beg Wyatt to forgive her now that she’s made a full confession. She’ll plead with him to tell her it’s not too late.

This is a HUGE lie, so there’s no way Wyatt will just forgive Flo on the spot. If he did, we’d all want to reach through the screen and slap him across the face. After Wyatt’s harsh treatment of Sally Spectra (Courtney Hope) over a far less serious secret, he’d better unleash his full wrath on fake birth mom Flo! It’s nice that Flo feels bad about what she did, but we fully support Wyatt making her feel worse.