BY hellodrdavis on July 26, 2019 | Comments: one comment
Related : Soap Opera, Spoiler, Television, The Bold and the Beautiful 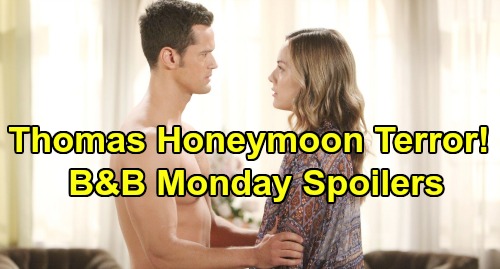 The Bold and the Beautiful spoilers for Monday, July 29 tease that Hope Forrester (Annika Noelle) will talk to Douglas Forrester (Henry Joseph Samiri) about his big statement that “baby Beth is alive.” As B&B viewers know, Douglas couldn’t help himself from telling Hope that Beth Spencer was alive when he overheard her and Liam Spencer (Scott Clifton) discussing their presumed-dead daughter. Douglas’ words drove Hope to tears, and on Monday’s episode she’ll address things with the little boy.

Since B&B spoilers say that the big Beth reveal won’t happen just yet, it looks like Hope will simply figure that Douglas is speaking in a spiritual sense and talking about Beth as people sometimes talk about his mother not being “gone” but always being in his heart. On Monday’s episode, look for Hope to address this with Douglas and assume that he was intending to convey that Beth would always be “alive” in their hearts.

But for Liam, Douglas’ statement may have a very different meaning. Keep in mind that Liam has been working hard to uncover the big secret that Florence “Flo” Fulton (Katrina Bowden) and Thomas Forrester (Matthew Atkinson) are keeping, and he strongly suspects that it has everything to do with Phoebe Forrester’s (River Davidson and Madeline Valdez) adoption. Liam even suspects that Flo didn’t actually give birth to Phoebe.

But when Liam stops and processes Douglas’ statement that “baby Beth is alive,” and realizes that Douglas may have heard this from Thomas, the wheels in his head will probably start turning at a frenetic pace. Liam likely won’t say anything to anyone just yet, but given that he’s now (a) questioning whether Flo ever gave birth, and (b) realizing that Douglas could have been parroting a snippet of something he heard from Thomas, Liam’s going to want to find out the truth as soon as possible.

Next, on the new episode of B&B on Monday, July 29, Hope and Thomas will indeed go on their “staycation” honeymoon, leaving Douglas behind with Steffy Forrester (Jacqueline MacInnes Wood) and Liam. Liam certainly won’t like the situation since he’d prefer for Hope to be as far away from Thomas as possible, but perhaps he’ll use the opportunity to spend a bit more time with Douglas and try to get some more information from him.

We’ll see if Douglas opens up a bit more about what he overheard Thomas say about Beth. The Bold and the Beautiful spoilers indicate that someone unexpected will give Liam information regarding Beth on Monday’s episode, so it’s possible that Liam will privately ask Douglas a few questions and see what he can find out. Of course, all Douglas really knows is that he heard his dad say that baby Beth was alive, and that Beth was Phoebe.

If Douglas ends up spilling the “Beth is Phoebe” part of what he heard to Liam, then that will be an explosive reveal, but B&B viewers will have to wait until Monday to see what really happens there.

At any rate, B&B spoilers say that Hope and Thomas’ “staycation” honeymoon will occur, but that some serious problems will arise for Thomas. First off, he’s probably going to be on edge about whether Douglas is going to keep his mouth shut while he’s staying with Steffy and Liam. But Hope is also going to throw a wrench in Thomas’ plans when she won’t stop talking about Douglas during their time away.

Of course, what Thomas really wants is some time away with his wife, complete with the usual honeymoon activities. He will want to focus on their relationship and consummate their marriage. But he’ll find himself getting annoyed when Hope continually talks about Douglas. That won’t sit well with Thomas, who will want her to focus exclusively on them and their marriage.

Thomas will wind up in a bind, since he can’t exactly show his true – and mean – colors with Hope, otherwise there’s no way he’ll ever be able to cajole her into his bed, which is his main goal right now. All of the pressure and anger that Thomas is feeling is going to lead him to get one step closer to spiraling out of control, as his frustration begins to overwhelm him.